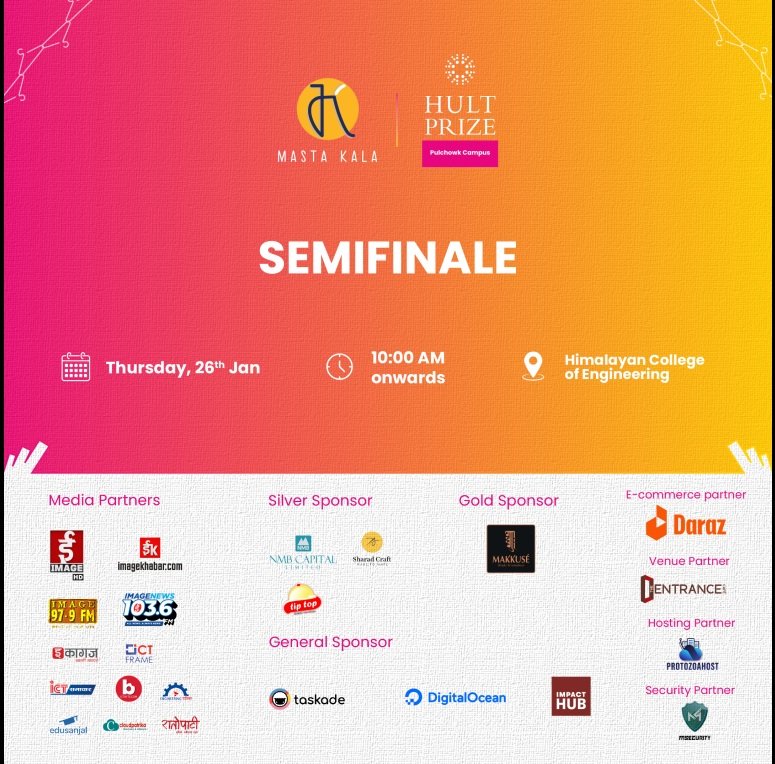 KATHMANDU, Jan. 24: The Hult Prize, also known as the Nobel Prize for Students, is organized annually. It is an international competition that encourages young people to develop creative and social enterprises that address some of the world's most pressing problems. Every year, Hult Awards at IOE, Pulchowk Campus organizes high-caliber activities and mentorship sessions for all its participants. Such programs offer guidance and mentoring in a variety of ways to help participants reach their goal of winning the Hult Prize.
Hult Awards at IOE organized orientations in almost all its constituent colleges. At each orientation, participants were given a short introduction to the Hult Prize and stories from previous participants, and details of their journey. Queries from the audience were addressed, and interested candidates were called for team registration
After these orientation sessions were completed, the next step for the competitors was to attend workshops in the Hult Prize's Entrepreneurship Series.
The first mentorship session “Introduction to Entrepreneurship” took place on December 24. The guest speakers for the discussion session were Rajni Gurung, Co-Founder and Operations Manager of Deego Nepal and Sunny Rajopadhyay, Co-Founder and CEO of Ecorb Ventures, Co-Founder of Mushroom Biotechnology, Natasha Khemka, Founder and CEO of Wildwives.
The second mentorship session "Forming a Dream Team" was held on January 07. The guest speakers for the talk session were Ms. Shreya Giri, Founder and Managing Director of the Mental Health and Wellness organization Happy Minds, and CTO of Urban Girl. And the co-founder was Kiran Timsina.
The 3rd Mentorship Session “Business Ideas and Design Thinking” was held on January 14. The guests of the talk session were Veed App Founder Director Dwa, Mastkala Co-Founder Nikhil Aggarwal, Ved App Co-Founder, and Managing Director Sujit Pathak, and Mastkala Co-Founder Arun Aggarwal.
The 4th mentorship session “Subtle Art of Pitching” was held on January 21. The guest speakers for the discussion session were Mr. Abhivind Khania, Nepal representative for the School of Young Politicians Asia (KASYP - Asia), and Ms. Ichcha Malla, a trailblazer in the world of corporate training and education.
A total of 4 sessions, were attended by professionals from different fields.
These workshops were very beneficial as they provided advice and guidance to the participants in preparing for the Hult Award. These sessions were very engaging as participants could express their ideas, engage in discussions, and overall enjoy their way toward the Hult Prize.
They provided a huge advantage to those planning to come out on top this year. Although led by professionals, these seminars were not intimidating. And it was free, so a good number of participants were seen.
After this, the next stage for the participants is the semi-finals.
The Hult Prize team at IOE, Pulchowk Campus could not have organized these seminars without the help of their faithful supporters. They have M Security as a security partner, Daraz as an e-commerce partner, NMB as a silver sponsor. Capital', 'Mast Kala' as Title Sponsor, Hosting Partner 'ProtozoaHost', 'Entrance Cafe' as Venue Partner, 'Impact Hub', 'Tasked', and 'DigitalOcean' as General Sponsors of the event, as well as their behind-the-scenes support.
These programs will soon lead to the finals of the Hult Prize at the I.O.E. Things are moving well and the entire chain of events is expected to proceed in the same fashion.

KATHMANDU, Jan. 27: The Federal Parliament Secretariat has released the schedule for the election of...

CAN Infotech from Feb 7

KATHMANDU, Jan. 26: The 28th edition of the CAN Infotech Exhibition is going to be...

Central Committee meeting of CPN (US) on February 4 and 5

Rabi Lamichhane citizenship dispute: Arguments on behalf of the petitioner over

KATHMANDU, Jan. 25: The final hearing in the case related to the citizenship dispute of...

KASKI, Jan. 25: Six people who were killed in the Pokhara plane crash on January...

KATHMANDU, Jan. 25: Prem Acharya of Ilam, who attempted self-immolation, has passed away. Acharya, who...