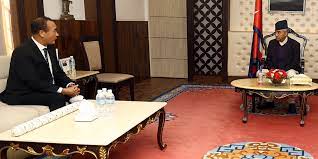 In the meeting held at the official residence of Prime Minister at Baluwatar today, the two discussed on further consolidating of the BIMSTEC process, according to the Ministry of Foreign Affairs. Lekphell is currently on his four-day introductory visit to Nepal. On the occasion, PM Deuba said that Nepal will have a creative and meaningful participation in the regional forum like BIMSTEC and pledged Nepal's full commitment and constructive support for the BIMSTEC procedures to make further advances.

Deuba also expressed his confidence that BIMSTEC would achieve a milestone in realizing the aspiration of the regional cooperation and to further strengthening the BIMSTEC's achievements. Commending Nepal for its contribution to the BIMSTEC, the Secretary-General said the Fourth BIMSTEC Summit held in Kathmandu was a milestone for the promotion, well-management and institutional development of the areas of mutual cooperation.

He also applauded the Nepal's commitments towards the regional economic bloc. Sri Lanka has proposed to host the BIMSTEC Fifth Summit which is already delayed by two years due to COVID-19 crisis.

However, member nations in the BIMSTEC are yet to endorse the proposal. BIMSTEC is a regional organisation comprising seven members Bangladesh, India, Sri Lanka, Thailand, Bhutan, Myanmar and Nepal while the first four nations are its founding members. It came into being on June 6, 1997.