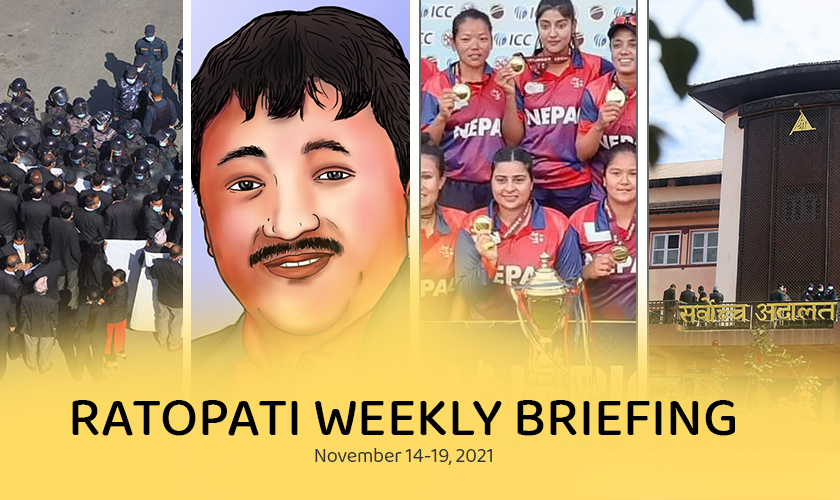 We present to you the major news and events that made headlines this week from Sunday to Friday (November 14 to 19).

The Supreme Court (SC) witnessed continued agitation by the lawyers affiliated to the Nepal Bar Association (NBA) and even the justices of the apex court.

Scuffles between security personnel and lawyers, entry of ‘hired forces’ and protests by those supporting Chief Justice (CJ) Cholendra Shumsher JB Rana made headlines this week.

The lawyers have been staging protests on the premises of the Supreme Court demanding CJ Rana step down as the head of the judiciary and give a way out.

Justices, too, have been boycotting all the benches other than that hearing habeas corpus. Chief Justice Rana, however, has been assigning all sorts of cases to them.

Meanwhile, a full court, a meeting of all the justices of the apex court, was held on Thursday afternoon.  The meeting passed a proposed draft that revises the existing Supreme Court Regulations. Similarly, a new guideline, which introduces a lottery system to assign cases to justices, was also endorsed by the full court.

With this, the justices of the apex court will be assigned cases through a system of drawing lots, unlike the existing provision which entrusts the chief justice with a prerogative to prepare the cause list to form benches and assign cases.

The directive is likely to come into implementation next week once it is published in the Nepal Gazette.

Nepal on Wednesday started issuing e-passports for the first time.

Foreign Minister Narayan Khadka inaugurated the e-passport personalization center at the Department of Passport and handed over the country's first-ever e-passport to Satya Mohan Joshi, a 102-year-old historian.

E-passports will ultimately replace the machine-readable passports, which were introduced in 2010 to replace the decades-old handwritten passports in Nepal.

All the offices are expected to issue machine-readable passports alongside e-passports until necessary infrastructure is ready for e-passports only.

Officials say that they have plans to fully go into the e-passport regime by January 2022-end.

Nepal defeated Qatar by 109 runs in the third and final T20 match played at the West End Park Stadium in Doha, Qatar on Thursday to win the series 3-0.

Nepal has created history by making a clean sweep in its first T20 International cricket series. Earlier, Nepal had defeated Qatar by 119 runs in the first match and by 61 runs in the second match.

Nepal played the three-match T20 series against Qatar as a preparation for the Asian qualifying for the ICC Women's T20 World Cup. The qualifying tournament will be held in Dubai from 6 to 12 November.

Six teams alongside Nepal, the UAE, Hong Kong, Bhutan, Kuwait and Malaysia are taking part in the qualifying tournament.

The government has decided to conduct by-elections for the 19 vacant seats of the National Assembly (NA)  on January 26, next year.

A Cabinet meeting held on Thursday took the decision to this effect.

As per the Constitution of Nepal, there is a  provision to conduct the election 35 days prior to the expiry of NA lawmakers’ tenure.

The tenure of twenty members of the 59-member National Assembly (NA) is due to expire on March 4, next year. One of them was nominated by the President at the recommendation of the Council of Ministers.

As per Article 86 of the Constitution of Nepal, NA members shall remain in position for six years. The term of office of one-third of the members of the National Assembly expires every two years.

Of the 20 members whose tenure is expiring March 2022, eight belong to the main opposition CPN-UML, five to the ruling CPN (Maoist Center) and four to the ruling CPN (Unified Socialist). Similarly, three Nepali Congress (NC) will also retire as NA members.

The by-polls are viewed as a test of the ruling alliance and the main opposition, CPN-UML.

The newly appointed chief minister of Province 1 Rajendra Rai won a vote of confidence on Wednesday.

Of 92 members in the provincial assembly, as many as 50 lawmakers cast their votes in the favor of CM Rai.  As many as 29 lawmakers, however, voted against the trust motion.

CM Rai, the third chief minister of the province after Sher Dhan Rai and Bhim Acharya, was required to garner 46 votes in order to win the vote of confidence.

Rai, the parliamentary party leader of CPN (Unified Socialist), was appointed the province’s chief minister on November 1 following the resignation of his predecessor Bhim Acharya. Acharya stepped down as the province's executive head ahead of a vote on his trust motion on November 1.

CPN-UML has geared up its preparation for the party’s Tenth General Convention which is scheduled to be held in Chitwan from November 26 to 28.

As many as 1,999 delegates, who were elected from across the country, will elect the new leadership including 15 office bearers for the next five years.

The party had held its first ever Statute Congress which amended the party statute introducing a provision to 15 central office-bearers-- a chairman, five vice-chairmen including a senior vice president, a general secretary, a deputy general secretary and seven secretaries.

The province-level conventions of the Rastriya Prajatantra Party (RPP) concluded on Monday.

As per the result, Ram Thapa was elected in Province 1, Hemjung Gurung in Gandaki and Pradip Kumar Uday in Lumbini Province. According to the coordinator of the party's general convention campaign committee, Mohan Shrestha, Bharat Giri in Province 2, Bikram Bahadur Thapa in Bagmati, Deep Bahadur Shahi in Karnali, and Dharmaraj Joshi in Sudur Paschim were unanimously elected as chairpersons.

The RPP organized the conventions of all the seven provinces on the same day on Sunday.

The RPP is holding its first general convention by electing a delegate through the active members. The general convention, which was earlier scheduled to be held in Kathmandu on November 27, 28 and 29, has been slated between December 2 and 4.

The census, which kicked off on November 12 will last until November 25 with a theme of ‘My census, My participation’.

Nepal, which began its census in 1919, conducts a national population census every 10 years.

As many as 39,000 numerators and 8,500 numerator workplaces have been deployed across the country.

Every individual is asked 80 questions as a part of the National Population Census. It has been assumed that it will take around 20 minutes for a numerator to collect data about a family.

9. A DIVISION LEAGUE  FROM FRIDAY

The Martyrs Memorial 'A' Division League kicked off from Friday.

As many as 14 teams are vying for the title. 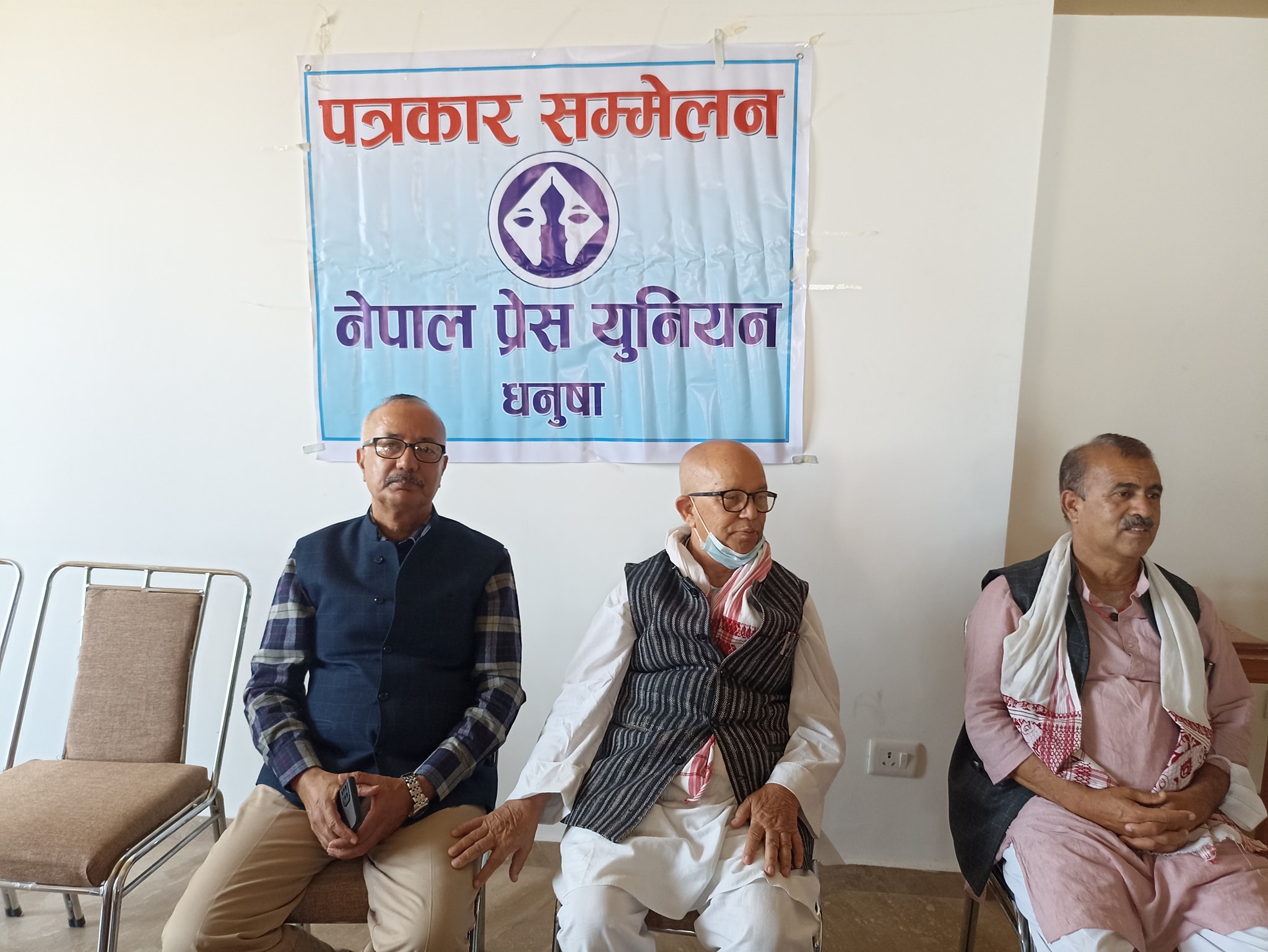 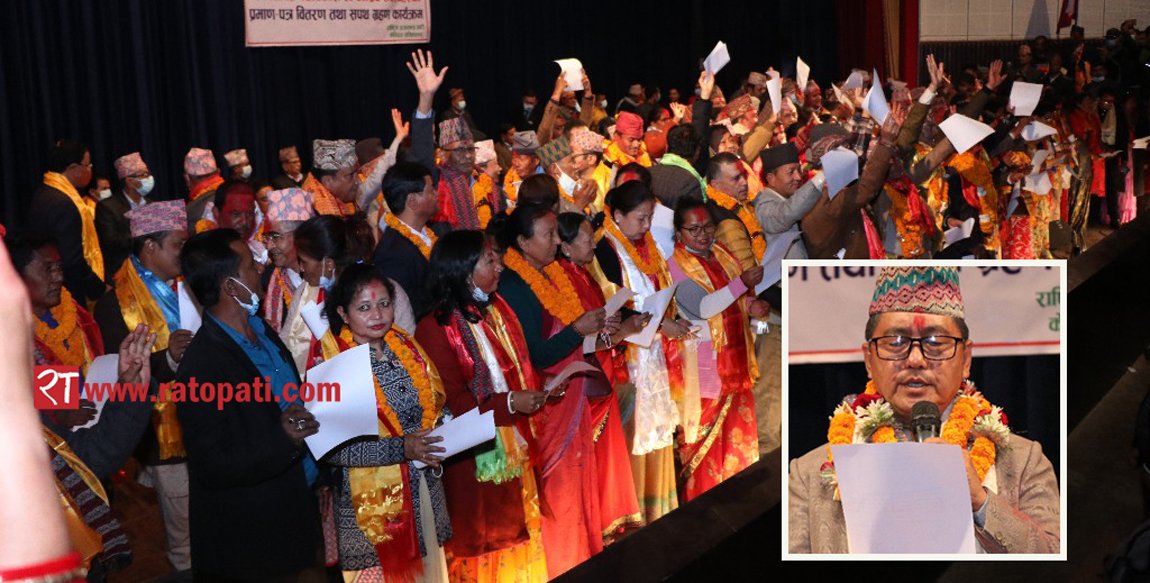