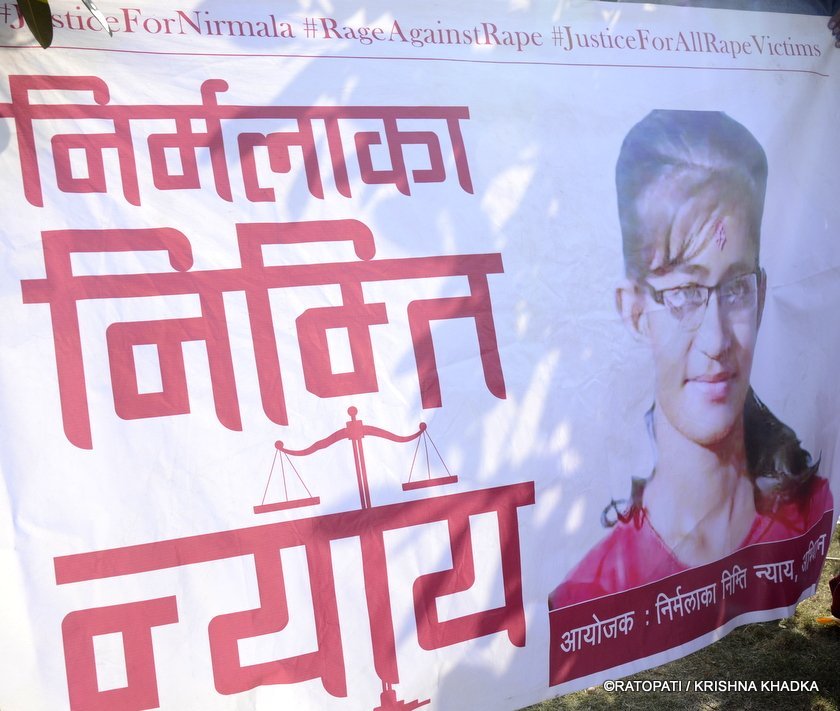 KATHMANDU, Jan. 21: Nirmala Pant of Ultakham in Bhimdatta Municipality of Kanchanpur was murdered on the 26th of July 2018 after being raped. To find the person involved in the murder of 13-year-old Nirmala, the police have so far examined the DNA of 120 people. However, in the absence of a DNA match, the result of the research is zero.
After being appointed Deputy Prime Minister and Home Minister, Rabi Lamichhane made the first decision to conduct a judicial inquiry into Nirmala Pant's murder. According to the decision of the Home Minister, a new committee was formed under the leadership of DIG Durga Singh on December 30, 2023, to make the murder investigation effective. The committee led by Singh went to Kanchanpur and returned after conducting an on-site investigation. The conclusion of the committee is that there is no alternative to DNA matching to identify the murder accused.
After Nirmala's murder, Dilipsingh Bista was arrested by a team led by the then DSP of the Central Bureau of Investigation, Angur GC. After Nirmala's 'vaginal swab' did not match Bista's DNA, on September 11, 2018, the public prosecutor's office decided to release Bista to an ordinary ordeal.
After Dilip Singh's escape, the police have so far taken blood samples of 120 people and conducted DNA tests. The investigation officers of the Central Bureau of Investigation have briefed Home Minister Rabi Lamichhane about it at the police headquarters.
After the murder, the Central Bureau of Investigation has been continuously deploying teams. Even before the formation of the committee under the leadership of Durga Singh, a team led by Inspector Dhandev Saud from the Bureau was working in Kanchanpur.
The latest committee led by DIG Singh has collected blood samples from 5 people for DNA testing. Two of them are Indians, one of whom is Mohammed Islam, the son of a vegetable farmer near Nirmala's house. But after it was found that there were two people with the same name in his village in India, the blood samples of both people were tested, according to police sources.
However, the DNA report of both of them has come 'negative'. Samples of 3 people from Kanchanpur house have been tested at the Central Forensic Science Laboratory of Police. Their report is yet to come.
The Singh-led committee said that the Nirmala murder is being investigated from a new vein. The committee is also analyzing old research reports and collected evidence. Spokesman (SP) of the Central Bureau of Investigation Kamal Thapa, who is also a member of the committee, says, 'We have reviewed the investigation so far, and we are discussing how to proceed with the investigation.'
SP Thapa claimed that the CIB will continue the investigation until the accused is identified. He says, "There is no alternative to matching DNA."
Ancestry research
The Central Bureau of Investigation (CIB) has not adopted the concept of 'mass DNA' in the Nirmala murder case. The bureau has adopted the method of testing by taking samples of people from close circles. According to the current method of DNA testing, the police have been selecting a suspect based on suspicion and collecting samples for testing.
The police are collecting samples from people who are addicted to drugs, who can cross the river at the scene of the incident, and those who are mentally deranged. Samples of those who were around the incident site on July 2018 have been collected.
According to the circumstantial evidence, the samples taken for scientific testing should be matched with Nirmala's 'vaginal swab'. The forensic science laboratory has developed 16 characters from 'vaginal swab'. Male lineage is detected by the test done by the 'Y STR' method.
The committee which was formed earlier under the leadership of DNA expert Jeevan Rijal to investigate the Nirmala incident suggested that human intelligence should be emphasized in the investigation saying that it should be tested by the 'autosomal' method. According to Rijal, the 'pin point' is detected when tested by the 'autosomal' method. Of course, the relevant accused will be identified.
The Rijal-led committee admitted that male DNA was found in 'Y STR' and wrote in its response, "The finding of male DNA means that there is a male contributor."
The Rijal-led committee concluded that there was a problem in the collection of vaginal swabs and suggested to investigate using human intelligence instead of DNA testing. However, since 8 policemen have been prosecuted in the Nirmala case, the investigating officers have hesitated to switch to another method.
About the reason for not testing by autosomal method, Dr. Chief of Central Legal Science Laboratory, Rakesh Singh has said that he could not do autosomal STR because the ratio was low.
Police officials say that after matching the pattern with the 16 characters developed by the 'Y STR' method, the lineage of the accused will be found and then the investigation will be narrowed down.
5 committee
Earlier, 5 committees investigated the murder of Nirmala Pant. The committee formed under the leadership of DIG Durga Singh is the sixth.
So far, 78 people from 8 police offices have investigated Nirmala's murder, and 44 people from the Central Bureau of Investigation have investigated the incident.