What is the healthiest way to cook meat? 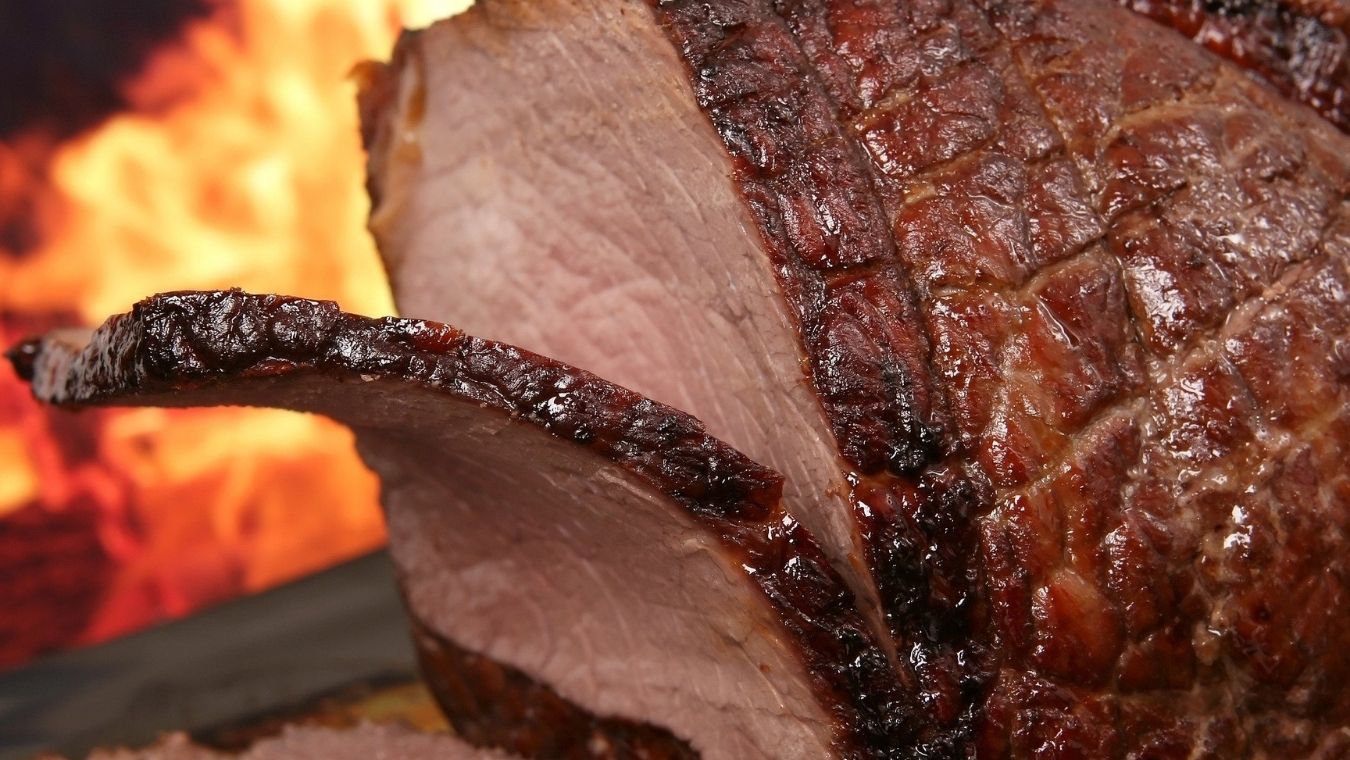 Meat is a staple food in many diets. It’s tasty, satisfying and is an excellent source of high-quality protein and other important nutrients.

However, different cooking methods can affect the quality and healthiness of meat.

This article takes a detailed look at the changes that occur in meat during cooking. It also provides guidance for choosing the healthiest cooking methods.

How you cook your meat matters

Humans have been cooking meat for at least 250,000 years, according to estimates. Cooking meat breaks down any tough fibers and connective tissue, which makes it easier to chew and digest. It also leads to better nutrient absorption.

In addition, cooking meat properly kills harmful bacteria such as Salmonella and E. coli, which can cause food poisoning that results in illness or even death.

However, cooking meat can reduce its antioxidant capacity, depending on how it is cooked and for how long.

Nutrients can also be lost during the process of cooking meat. The extent to which this occurs is strongly influenced by the cooking method.

What’s more, heating meat to high temperatures for long time periods can lead to the formation of harmful compounds that may increase disease risk.

Choosing cooking methods that minimize nutrient loss and produce the lowest amounts of harmful chemicals can maximize the health benefits of consuming meat.

Read on for an overview of how different cooking methods affect meat.

Roasting and baking are similar forms of cooking using dry heat. Dry heat cooking differs from moist heat methods, where meat is cooked in water or another liquid.

The term roasting typically refers to cooking meat in a large dish called a roasting pan. A roasting pan often includes a rack to keep the meat above the juices that drip down as it cooks.

This can also be done with an oven rotisserie, a device that allows meat to cook on a slow-turning spit. This technique is usually reserved for cooking large pieces of meat or entire animals, such as chickens or turkeys.

By contrast, baking is generally used for chicken, poultry or fish rather than red meat. The meat is cooked in a baking dish that may be covered or open.

Temperatures for roasting and baking range from 300–425°F (149–218°C) and cooking time may vary from 30 minutes to an hour or more, depending on the type and cut of meat.

Generally speaking, roasting and baking are healthy forms of cooking that result in minimal losses of vitamin C.

However, during long cooking times at high temperatures, up to 40% of B vitamins may be lost in the juices that drip from the meat.

Gathering these juices and serving them with the meat, which is sometimes called au jus on menus, can help minimize nutrient loss.

Grilling involves cooking with a heat source directly below your food, such as an open grill or barbecue. Grilling temperatures usually range from 375–450°F (190–232°C).

In broiling, the heat source comes from above, such as the broiler in your oven. Broiling occurs at very high temperatures, typically 500–550°F (260–288°C).

Grilling is extremely popular because it imparts a delicious flavor to meat, especially steaks and burgers.

Unfortunately, this method of cooking often leads to the production of potentially harmful chemicals.

When meat is grilled at high temperatures, fat melts and drips onto the grill or cooking surface. This creates toxic compounds called polycyclic aromatic hydrocarbons (PAHs) that can rise up and seep into the meat.

PAHs have been linked to several types of cancer, including breast and pancreatic cancer.

However, studies have found that removing drippings can reduce PAH formation by up to 89%.

Another concern with both grilling and broiling is that they promote the formation of compounds known as advanced glycation end products (AGEs).

AGEs have been linked to an increased risk of several diseases, including heart disease, kidney disease and skin aging.

They are created in the body as by-products of a chemical reaction that occurs between sugars and proteins. They can also form in foods during cooking, especially at high temperatures.

One study found that broiled beef had higher levels of AGEs than beef cooked by other methods.

Keeping cooking times short and removing meat from high heat before it becomes charred may help reduce the amount of AGEs produced.

Although cooking times are generally longer than for many other cooking methods, temperatures are lower.

The three methods are classified by the temperature of the cooking liquid:

Lengthy cooking in liquids at temperatures above 200°F (93°C) may cause meat proteins to toughen.

Poaching involves shorter cooking times than stewing or simmering and is reserved for delicate foods like chicken, fish and duck.

Research has shown that cooking with moist heat at low temperatures can minimize the formation of AGEs.

On the other hand, the lengthy cooking times for stewing and simmering can lead to a loss of B vitamins, nutrients that are typically high in meat and poultry.

Up to 60% of thiamine, niacin and other B vitamins may be lost from the meat as its juices run off. Fortunately, consuming the meat’s juices as part of a stew or soup can significantly reduce these vitamin losses.

Pan Frying and stir-frying both refer to cooking meat with fat in a skillet, wok or pot.

During stir-frying, food is continuously flipped or stirred with a spatula as it cooks, while pan frying generally doesn’t involve this type of constant movement.

Although these methods use high heat, cooking times are very short, which helps maintain tender meat with good flavor.

These cooking techniques also promote the retention of nutrients and are less likely than many other methods to cause the cholesterol in fatty meats to become oxidized. Oxidized cholesterol is considered a risk factor for heart disease.

On the other hand, pan frying and stir-frying have some drawbacks.

Heterocyclic amines (HAs) are compounds capable of causing cancer. They are formed when meat reaches high temperatures during cooking. Studies have found that HAs often occur during the pan frying of meat and poultry.

Marinating meat in mixtures containing fruits, vegetables, herbs and spices high in antioxidants may help reduce the formation of HAs. One study found that adding herbs to a marinade decreased HAs by about 90%.

In addition, it’s important to choose healthy fat when pan frying or stir-frying.

Most vegetable and seed oils are high in polyunsaturated fats that are prone to damage at high temperatures. Heating these oils also promotes the formation of oxygenated aldehydes, potentially cancer-causing chemicals found in cooking fumes.

Palm oil and olive oil have been shown to form fewer aldehydes than vegetable and seed oils during stir-frying and pan frying.

Other healthy cooking fats that are stable at high temperatures include coconut oil, lard and tallow.

Deep-frying refers to completely immersing food in fat during cooking.

Meat and poultry are sometimes, although not always, breaded or coated in batter prior to being deep-fried.

Benefits of deep-frying meat include enhanced flavor, crispy texture and excellent retention of vitamins and minerals.

Deep-frying has been shown to result in higher levels of toxic by-products like AGEs, aldehydes and HAs than most other cooking methods.

The amount of fat absorbed by the meat during deep-frying can also be significant, particularly if it’s breaded or battered.

Additionally, the unhealthy vegetable and seed oils typically used for deep-frying may do more than increase calorie intake. This method of cooking has been linked to increased cancer and heart disease risk.

Slow cooking involves cooking for several hours in a slow cooker, sometimes referred to as a crock pot. This is a large, electronically heated ceramic bowl with a glass lid.

Cooking temperature settings on a slow cooker range from 190°F (88°C) for the low setting to 250°F (121°C) for the high setting. These low temperatures minimize the formation of potentially harmful compounds.

The major advantage of slow cooking is its ease and convenience. Meat can simply be seasoned and placed in the slow cooker in the morning, allowed to cook for six to eight hours without needing to be checked, then removed and served at dinnertime.

Slow cooking is similar to simmering and stewing meat. Unfortunately, it also results in the loss of B vitamins released in the juice as the meat cooks.

Slow cooking makes tougher cuts of meat, such as brisket, tender and flavorful.

However, it can sometimes cause poultry and other delicate meats to become overly soft and mushy, especially with longer cooking times.

Pressure cooking is a form of moist heat cooking that has regained popularity in recent years because it allows food to cook very quickly and uses less energy than other methods.

A pressure cooker is a pot with a sealed lid and a safety valve that controls the pressure of steam that builds up inside.

The main advantage of cooking in a pressure cooker is that it significantly decreases the time it takes to cook meat or poultry.

What’s more, pressure cooking leads to less oxidation of cholesterol than some other cooking methods, provides flavor and tenderness to meats and minimizes vitamin losses.

One disadvantage is that if the device needs to be opened to check food for doneness, this temporarily stops the cooking process.

What is the healthiest way to cook meat?

From a health standpoint, the best ways to cook meat are slow cooking, pressure cooking and sous vide.

However, all methods of cooking meat have advantages and disadvantages.

Some of the most popular types, including grilling and deep-frying, are concerning due to the high levels of toxic by-products they create.

Poaching and other forms of moist heat cooking at lower temperatures produce fewer of these compounds, but can result in the loss of vitamins.

However, if you grill or deep-fry your meat, you can reduce the risks by removing the drippings, not overcooking the meat and using healthy fats and marinades.