Cristiano Ronaldo: Manchester United forward wants to leave but where would he go?

Cristiano Ronaldo doesn't have an obvious next destination as he considers his Manchester United future, according to the BBC Radio 5 Live Euro Leagues podcast team. 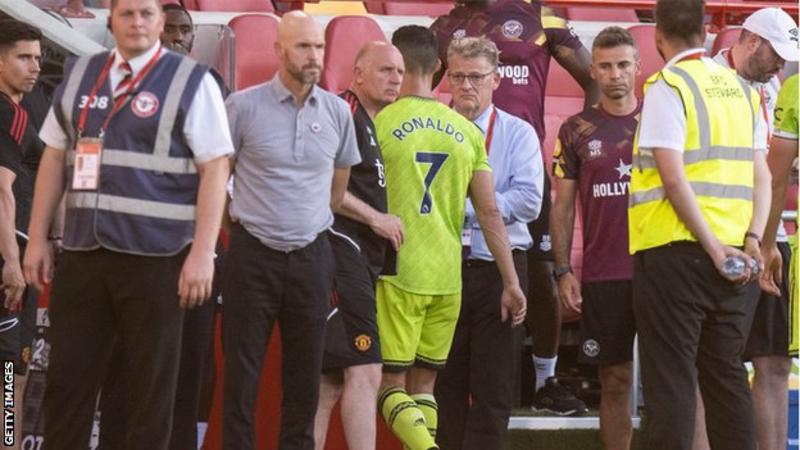 AUG 19: Julien Laurens, Guillem Balague and Raphael Honigstein have been considering Ronaldo's future - with the prolific forward having made it no secret that he wants to leave Old Trafford to play in the Champions League.

United, having expressed concerns about how the 37-year-old forward's mood is affecting morale in the camp, are ready to let him go.

And Balague told the Euro Leagues podcast that "there are a bunch of reasons he should not be at United".

Ronaldo, who returned to Old Trafford for a second spell in August 2021, disagreed with the style of play that interim manager Ralf Rangnick tried to implement after replacing the sacked Ole Gunnar Solskjaer in early December.

He appears no happier since the arrival of new boss Erik ten Hag.

Balague said he would be "fascinated" to hear what Rangnick had to say on the situation while he was in charge.

"I think Rangnick had suggested get rid of him and if that is the case United should not be surprised he took the first step," he said.

'Simeone wants Ronaldo but there is no space for him'

Atletico Madrid, Sporting Lisbon and Borussia Dortmund have been linked with the five-time Ballon d'Or winner but there have been no official offers.

He wants to play until he is 41, says Balague, who added that someone needs to tell him that "beggars can't be choosers".

Balague said: "He can't choose where he goes now but no one can talk to him like that. [Diego] Simeone wants him at Atletico but there is no space for him and the fans don't want him.

"There is no space in the wage cap at Atletico and I am sure many clubs think that - he doesn't have a place to go right now."

Ronaldo is the highest-paid player in the Premier League, and his salary puts him out of the reach of many clubs.

Laurens questioned why a player who was a legend at Real Madrid - becoming their all-time leading scorer with 451 goals in 438 appearances - would want to go to city rivals Atletico.

"I find that baffling - just to score a few more Champions League goals? I would struggle with that - I can't get my head around it," said Laurens.

Honigstein said that signing Ronaldo puts a club "on the map" regardless of his age or wage bill.

"Owners and investors start thinking: 'Wow, Ronaldo, amazing - the exposure, the media, merchandise - if we can get him we would be stupid not to.'"

But Ronaldo likes to be the star man - which appears increasingly unlikely at United, given that it remains unclear how he fits into Ten Hag's system.

"We have seen so many clubs and coaches saying they can't see how he is going to fit, they want someone younger or more dynamic," Honigstein said.

Should Ronaldo fail to find a club that will take him, could United be forced into terminating his contract and letting him go for free?

Honigstein said that would be "sensational" but "not out of the question", with the issues in the dressing room said to be becoming toxic to the team environment.

He added: "There is no offer - it would be hard to find a destination for him now."