On Monday morning, Prime Minister Narendra Modi addressed the citizens from the ramparts of the historic Red Fort on the occasion of India's 75th birthday. 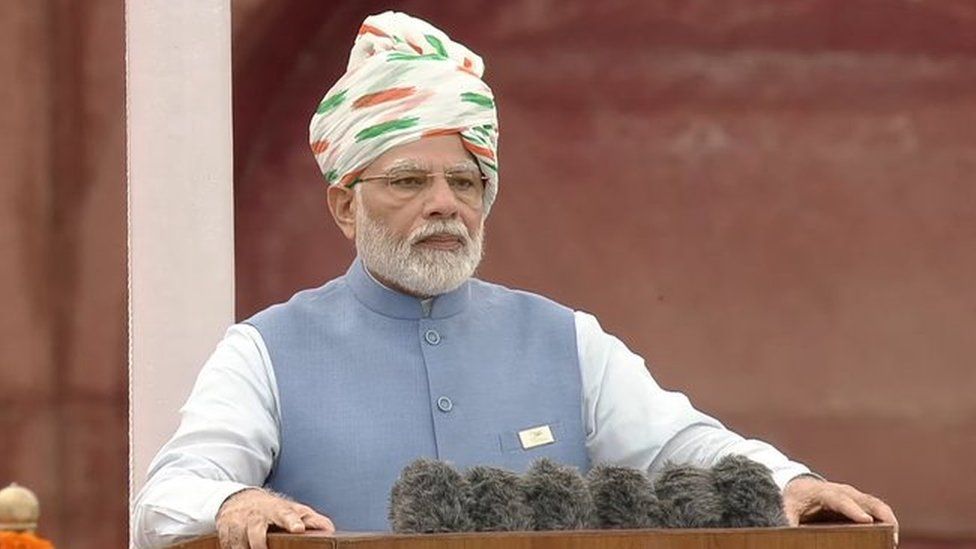 AUG 15: Upon his arrival at the 17th Century monument, Mr Modi unfurled the national flag and was greeted by a 21-gun salute. As he took to the stage, helicopters flew past, showering flower petals on him.

In a speech watched by millions of Indians on live TV, Mr Modi spoke on a plethora of issues, laying out a roadmap for the country's development, calling for an end to misogyny and weeding out corruption and nepotism.

Here are some of the highlights:

'Do nothing that lowers the dignity of women'

In his first Independence-Day speech after taking over as prime minister in 2014, Mr Modi had condemned rapes in India and questioned parents for putting restrictions on their daughters while letting their sons do as they pleased.

On Monday too, he spoke about gender equality and emphasised the importance of treating sons and daughters as equal at home.

"Maybe this is not a topic for the Red Fort, but who else can I share my pain with if not with the people of my country?" he said.

"For some reason, a distortion has crept into our conduct, our behaviour, our words so at times we insult women. Can we take a pledge to stop this behaviour?" he asked.

Hailing women's work in judiciary, governance, academics, science and sports, the prime minister said that respect for women was key to India's growth and "we need to support our nari shakti" (woman power).

"For India to achieve the goals envisioned by its freedom fighters in the next 25 years, women have to play a critical role. If we uplift women and empower them, we can achieve our goals quickly and easily.

"The more opportunities we give to our daughters, the more they will take India forward," he said.

Mr Modi's emphasis on gender equality hits all the right notes but critics point out that 75 years after independence, India remains a largely patriarchal society where misogyny is rampant.

Some took to social media to point out the misogynistic comments made by Mr Modi himself or his party members and said that to make India a gender just society, we need much more than lip service.

The announcement that India will soon have 5G mobile services will make many happy in a country with a young population and 1.2 billion mobile phone subscribers.

With more than 500 million internet users, India is among the fastest-growing digital markets with more and more people logging in. But the growth has been uneven, mostly restricted to cities and towns while millions in rural areas have to put up with patchy connectivity.

India recently sold spectrum for 5G airwaves for approximately $19bn and reports say that the much-awaited high-speed mobile services would be launched in a few weeks.

In his speech on Monday, Mr Modi said that digital services would reach every village and that 400,000 digital entrepreneurs were being trained in rural areas.

"India's techade [tech decade] is here. With 5G, semiconductor manufacturing and Optical Fibre Cables (OFCs) in villages, we will bring in revolutions in education, health and agriculture to the grassroots level," he said.

"The Digital India Movement can bring about revolutionary changes in India and in the lives of the common man," he added.'

In an apparent attack on his political opponents, Mr Modi said two of the biggest challenges facing India were "corruption and nepotism".

"Corruption is hollowing out the country like a termite and we will have to fight it. We are going against those who have looted the country and we are trying to get the loot back. We are entering a decisive phase and no high or mighty would be spared now."

Mr Modi said "while some people did not have homes, others did not have enough space to keep their ill-gotten wealth" and wondered why people felt sympathy for those politicians who had been jailed for corruption.

"For this mentality to end," he said "people must hate corruption and the corrupt and look down upon them socially."

In the same breath, Mr Modi talked about nepotism, calling on "citizens of India to stand against dynasty and dynastic politics".

Since its independence in 1947, India has been ruled for a large part by the Congress party which is led by the Nehru-Gandhi dynasty. Many Indian states are also ruled by local political families.

Mr Modi, who often speaks proudly of his humble origins, never fails to take potshots at dynasties and Monday's speech was no different.

'Nepotism is not just in politics'

But on this occasion, Mr Modi went a step ahead to say that when he talked about nepotism, it was not just about politics.

"Dynasty kills merit, but unfortunately dynasty is not just limited to politics. We need to discourage this in institutions, in sports. We need to start a revolution against it."

Mr Modi credited India's recent success in sporting events such as the Commonwealth Games in Birmingham and the Tokyo Olympics and Paralympics to the transparency in the selection process of athletes.

"It's not that we didn't have talent earlier, but transparent selection bereft of nepotism has led to Indians winning medals," he said.

Some, however, have pointed out that Mr Modi's government has been spending more money on athletes, but India's medal haul has been better in the past - in Birmingham, India won 61 medal while in 2010 Commonwealth Games in Delhi, India's tally was 101.