From Kabul and beyond, a year of Taliban rule in Afghanistan

When you arrive at Kabul International Airport, the first thing you notice is the women, clothed in brown scarves and black cloaks, stamping passports. 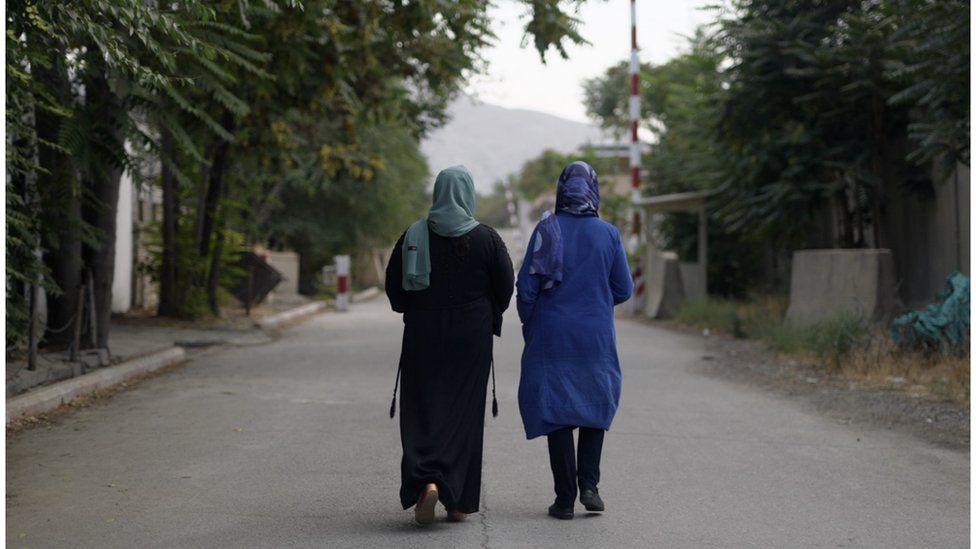 AUG 15: An airfield, which one year ago was the scene of a panicked tide of people desperate to escape, is now much quieter and cleaner. Rows of white Taliban flags flutter in a summer's breeze - billboards of the old famous faces have been painted over.

What lies beyond this gateway to a country which was turned upside down by a swift Taliban takeover?

Kabul, where women are told to give their jobs to men

The messages are startling, to say the least.

"They want me to give my job to my brother," writes one woman on a messaging platform.

"We earned our positions with our experience and education… if we accept this it means we have betrayed ourselves," declares another.

I'm sitting down with a few former senior civil servants from the finance ministry who share their messages.

They're part of a group of more than 60 women, many from the Afghanistan Revenue Directorate, who banded together after being ordered to go home last August.

They say Taliban officials then told them: Send CVs of your male relatives who can apply for your jobs.

"This is my job," insists one woman who, like all women in this group, anxiously asks for her identity to be hidden. "I worked with so much difficulty for more than 17 years to get this job and finish my master's degree. Now we are back to zero."

On a telephone call from outside Afghanistan, we're joined by Amina Ahmady, former director general of the Directorate.

She's managed to leave, but that's not a way out either.

"We are losing our identity," she laments. "The only place we can keep it is in our own country."

Their group's grand title - "Women Leaders of Afghanistan" - gives them strength; what they want is their jobs.

They're the women who seized new spaces for education and job opportunities during two decades of international engagement which ended with Taliban rule.

Taliban officials say women are still working. Those who do are mainly medical staff, educators and security workers including at the airport - spaces where women frequent.

The Taliban also emphasise that women, who once held about a quarter of the government's jobs, are still being paid - albeit a small fraction of their salary.

A former civil servant tells me how she was stopped on the street by a Talib guard who criticised her Islamic head cover, or hijab, although she was fully covered.

"You've got more important problems to solve than hijab," she shot back - another moment of women's determination to to fight for their rights, within Islam.

The scene seems idyllic. Sheaves of golden wheat shimmer in a summer's sun in the remote central highlands of Afghanistan. You can hear a gentle lowing of cows.

"There's much less wheat this year because of drought," Noor remarks, sweat and dirt streaking his young face. "But it's the only job I could find."

A harvested field stretches into the distance behind us. It's been 10 days of backbreaking work by two men in the prime of their life for the equivalent of $2 (£1.65) a day.

"I was studying electrical engineering but had to drop out to support my family," he explains. His regret is palpable.

Ahmad's story is just as painful. "I sold my motorbike to go to Iran but I couldn't find work," he explains.

Seasonal work in neighbouring Iran used to be an answer for those in one of Afghanistan's poorest province. But work has dried up in Iran too.

"We welcome our Taliban brothers," Noor says. "But we need a government which gives us opportunities."

A former-shadow deputy governor during the war, he gruffly shares all his woes.

"All these problems make me sad," he says, listing poverty, bad roads, lack of access to hospitals and schools not operating properly.

The end of the war means more aid agencies are now working here, including in districts out-of-bounds before. Earlier this year, famine conditions were detected in two of Ghor's most distant districts.

But the war isn't over for Governor Din Dost. He says he was imprisoned and tortured by US forces. "Don't give us more pain," he asserts. "We don't need help from the West."

"Why is the West always interfering?" he demands. "We don't question how you treat your women or men."

In the days that follow, we visit a school and a malnutrition clinic, accompanied by members of his team.

"Afghanistan needs attention," says the Taliban's young university-educated Health Director Abdul Satar Mafaq who seems to sound a more pragmatic note. "We have to save people's lives and it doesn't need to involve politics."

I remember what Noor Mohammad told me in the wheat field.

"Poverty and famine is also a fight and it's bigger than the gunfights."

Star student shut out of class in Herat

Eighteen-year-old Sohaila is fizzing with excitement.

I follow her down a darkened stairwell into the basement floor of the women-only market in Herat, the ancient western city long known for its more open culture, its science and creativity.

It's the first day this bazaar is open - the Taliban shuttered it last year, Covid-19 the year before.

We peer through the glass frontage of her family's dress shop which isn't ready yet. A row of sewing machines sits in the corner, red heart balloons hang from the ceiling.

"Ten years ago, my sister started this shop when she was 18 years old," Sohaila tells me, sharing a capsule history of her mother and grandmother's stitching of brightly-patterned traditional Kuchi dresses.

Her sister had also opened an internet club and a restaurant too.

There's a quiet hum of activity in this women's only space. Some are stocking their shelves, others gossiping as they linger over jewellery and embroidered garb.

The premises are poorly lit, but in this gloom, there's a shaft of light for women who've spent all too much time just sitting at home.

"The Taliban have closed the high schools," she remarks, matter-of-fact, about something that has enormous consequences for young ambitious teenagers like her.

Most secondary schools are shut, on orders of the Taliban's top ultra-conservative clerics, even though many Afghans, including Taliban members, have called for them to re-open.

I ask her whether she can be the Sohaila she wants to be in Afghanistan. "Of course", she declares confidently. "It's my country and I don't want to go to another country."

But a year without school must have been hard. "It's not just me, it's all the girls of Afghanistan" she remarks stoically.

Her voice trails off as she breaks down in tears.

"I was the top student."