China gears up for military drills after Pelosi visit to Taiwan

China is gearing up for big military exercises in the seas around Taiwan following top US politician Nancy Pelosi's trip to the island. 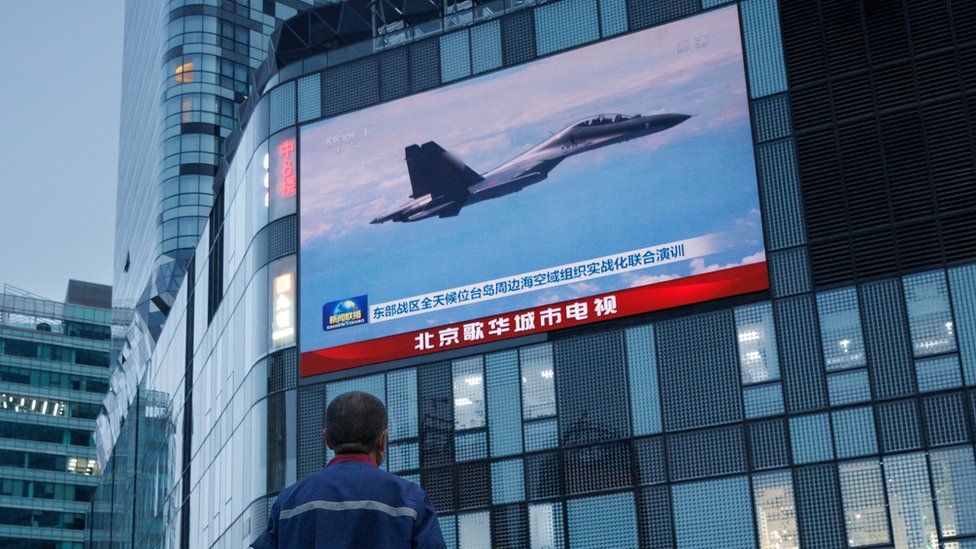 Ms Pelosi made a brief but controversial visit to Taiwan, which China regards as a breakaway province.

The drills - China's biggest ever around Taiwan - are Beijing's main response to the visit, although it has also blocked some trade with the island.

The exercises will take place in busy waterways and will include long-range live ammunition shooting, Beijing says.

Taiwan said it scrambled jets to warn off Chinese warplanes on Wednesday.

Its military had also fired flares to drive away unidentified aircraft, probably drones, which were flying over the Kinmen islands, located close to the mainland,

US National Security Advisor Jake Sullivan said the military drills were irresponsible and warned they could spiral out of control.

The US hoped Beijing would avoid "escalation that could lead to a mistake or miscalculation" in the air or on the seas, he said in an interview with National Public Radio on Wednesday.

Japan has also expressed concern to China over the areas covered by the military drills, which it says overlaps with its exclusive economic zone (EEZ).

The boundaries of Japan's EEZ have been contentious among its neighbours, and includes some islets also claimed by Beijing.

In response, Chinese government spokeswoman Hua Chunying said the waters in this area had not been delimited and Beijing did not accept the "so-called" Japan EEZ.

These drills are unprecedented

The announcement of six large exclusion zones around the island starting on Thursday, and lasting for four days, is ominous. Beijing did the same thing back in 1996, the last time there was a so called "Taiwan Straits Crisis". But then the exclusion zones were all well outside Taiwan's territorial waters.

This time three of the six zones intrude into Taiwan's 12-mile limit. That is unprecedented. Taiwan's defence ministry has already called the move a breach of UN conventions, and said it amounts to an air and sea blockade against the island.

If China were to move ships or aircraft into those areas, it would amount to an invasion of Taiwan territory. This makes the stakes much higher as Taiwan may feel compelled to defend its own waters.

The US Navy is watching all this very closely, and already has the USS Ronald Reagan carrier battle group sailing nearby in the Philippine Sea.

Mrs Pelosi, the most senior US politician to visit Taiwan in 25 years, made the trip as part of a wider Asian tour.

China had warned her not to travel to the island.

Accusing the US of "violating China's sovereignty under the guise of so-called democracy", Chinese Foreign Minister Wang Yi said: "Those who play with fire will not come to a good end and those who offend China will be punished."

In a statement after the visit, Ms Pelosi said China cannot "prevent world leaders or anyone from travelling to Taiwan to pay respect to its flourishing democracy, to highlight its many successes and to reaffirm our commitment to continued collaboration".

After leaving Taiwan, Ms Pelosi travelled to South Korea, where she is due to meet the speaker of the National Assembly, Kim Jin-pyo.

They are expected to discuss regional security, economic co-operation and climate change.

The US walks a diplomatic tightrope with its Taiwan policy. On the one hand, it abides by the "One China" policy, which recognises only one Chinese government, giving it formal ties with Beijing and not Taiwan.

On the other, it maintains a "robust unofficial" relationship with the island, which includes selling weapons for Taiwan to defend itself.