EU leaders to back Ukraine as candidate at Brussels summit

Ukraine is set to be approved as an EU candidate at a Brussels summit on Thursday, after the European Commission gave the green light. 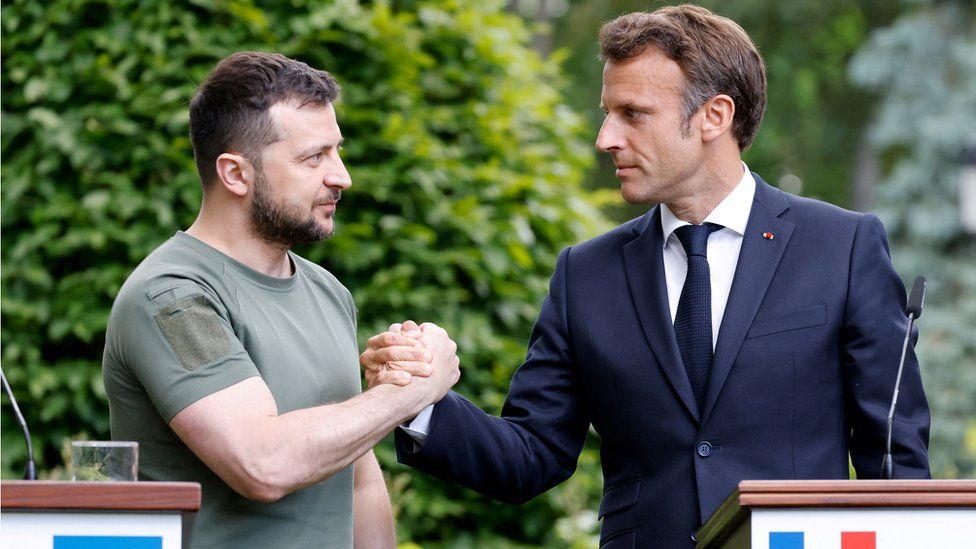 JUNE 23: Ukraine applied days after the Russian invasion in February, and the process has since moved at a record speed.

Its ambassador to the EU told the BBC it would be a psychological boost for Ukrainians.

But Vsevolod Chentsov admitted "real integration" could only start when the war was over.

Candidate status is the first official step towards EU membership and France said this week there was "total consensus" on Ukraine. But it can take many years to join and there's no guarantee of success.

The Western Balkan countries of Albania, North Macedonia, Montenegro and Serbia have been candidate countries for years; in some cases for over a decade. Bosnia and Herzegovina applied for candidacy in 2016 but has still not succeeded.

EU leaders also meet their Western Balkan counterparts on Thursday morning, ahead of the main summit, to "build on the existing close ties", but discussions are expected to be difficult.

Some members states are pushing for Bosnia to be given candidate status, although that is not expected to happen. However, there are hopes North Macedonia and Albania may make progress.

'Why should we wait?'

"We do not accept the idea of the queue," Ukraine's envoy told the BBC, arguing Kyiv's eagerness could set an example to other states.

"Every state has its road map, has its path. And if there is political will, if there is support of society [and] business operators to move forward to implement reform in a bold and fast way, why we should wait?"

Moldova's application is also recommended for conditional approval while Georgia is set to be turned down, although the European Commission said the country could belong to the EU in "due time". More than 100,000 people attended a rally on Monday night in the Georgian capital appealing for candidate status.

Several EU states have agreed to back Ukraine's candidacy, provided conditions are attached before accession negotiations can begin, including judicial and anti-corruption reforms.

Mr Chentsov has insisted some reforms can take place, even while the country is at war and not in control of its whole territory.

"We are not starting from scratch," he insists, pointing to work carried out since the EU and Ukraine signed an association agreement in 2014. But it would be "logical" to carry out bigger reforms once the situation on the ground became more stable, he added.

French President Emmanuel Macron said in May that the prospect of membership was decades away and the Nato secretary general has warned the conflict could last years.

But Mr Chentsov said no-one had a crystal ball and he felt there was a will "to help Ukraine to get there".

As well as deciding on which countries should be given candidate status, EU leaders will also discuss food security in light of Russia's blockade of Ukrainian ports, condemned by the EU's foreign policy chief this week as a war crime. And they will assess President Macron's proposal for a wider "European Political Community".

According to draft summit conclusions seen by the BBC, the aim would be "to foster political dialogue and co-operation to address issues of common interest so as to strengthen the security, stability and prosperity of the European continent".

The French leader has suggested the community could include countries waiting to join the EU such as Ukraine and the Western Balkan states, or even those that have left, which would currently just include the UK. However, a number of EU diplomats have rejected the idea as half-baked. The UK left the European Union in 2020.

The Ukrainian ambassador did not dismiss the idea out of hand, saying: "Probably it will be something to consider for the EU, for the UK to join and we can sit at the same table together with the EU, Ukraine and UK."

UK Foreign Secretary Liz Truss has said her preference would be to build on existing structures such as the G7 and Nato.