Mariupol: Ukraine doing everything to save remaining fighters

Ukraine is doing "everything possible and impossible" to save the remaining fighters trapped in Mariupol's Azovstal steelworks, a senior official has said. 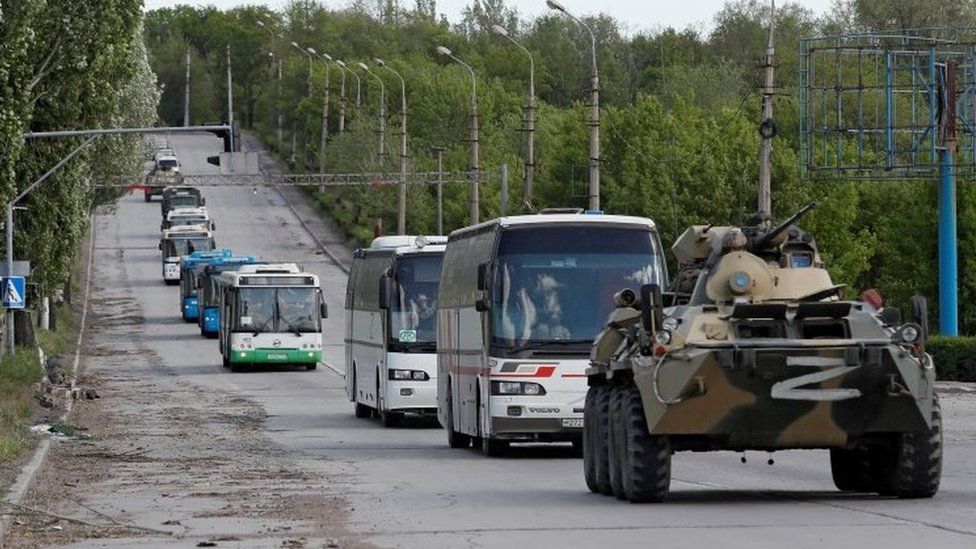 MAY 18: Deputy Defence Minister Hanna Maliar said Kyiv knew how many soldiers were still at the plant, but stressed that it was "sensitive information".

On Monday, 264 fighters - many badly wounded - were evacuated to areas held by Russian-backed rebels.

On Tuesday, another seven buses were seen leaving the site, Reuters said.

It added that the convoy later arrived in Olenivka, a village held by pro-Russian rebels in the eastern Donbas region.

Russian prosecutors said they would question all the Ukrainian soldiers as part of an investigation into what Moscow describes as "Ukrainian regime crimes against Donbas civilians".

Ukraine wants its troops - the last defenders of the southern port city - to be exchanged for captured Russian soldiers as part of an evacuation deal confirmed by Moscow.

Hundreds of Ukrainian soldiers - Marines, the National Guard (including the Azov regiment), border guards, police and territorial defence units - as well as a number of civilians with young children have been holed up at the site since advancing Russian troops encircled Mariupol in early March.

Earlier this month, dozens of civilians were evacuated from Mariupol to both Russia-controlled and Ukraine-controlled territory.

At Tuesday's briefing in Kyiv, Ms Maliar said only that "we know this number" when asked about how many Ukrainian fighters were still at the Azovstal site.

The sprawling four-square-mile complex is a maze of tunnels designed to survive a nuclear war.

Describing the fighters as "our heroes", Ms Maliar stressed that the operation was the only way to save them, adding that a "military deblockade" was simply impossible.

In his video address on Tuesday, Ukrainian President Volodymyr Zelensky said Ukrainian military, intelligence and negotiating teams, as well as the Red Cross and the UN, were involved in the evacuation operation. "Ukraine needs its heroes alive," he said.

However, he cautioned that the Ukrainian troops might not be freed immediately and warned that negotiations over their release would require "delicacy and time".

Ukrainian MP Lesia Vasylenko told the BBC it was essential that the deal struck with Russia, with the help of the Red Cross and the UN, went through and the soldiers were exchanged. Otherwise, she said, "the fate of these very brave men will be absolutely unknown and will be in Russian hands, which is far from an ideal situation".

Russian President Vladimir Putin said Ukrainian soldiers evacuated from the steel plant would be treated "in line with the relevant international laws".

However, Russia's lawmakers on Tuesday put forward plans to declare Azov regiment fighters "Nazi criminals" who must not be part of any prisoner swap with Ukraine.

The Azov regiment, set up as a volunteer militia in 2014 but now a National Guard unit, once had links to the far right.

Meanwhile, the office of Russia's prosecutor general has asked the country's Supreme Court to declare the unit a "terrorist organisation" in an apparent attempt to prevent its fighters being treated as conventional prisoners of war.

In a separate development, both Ukraine and Russia on Tuesday admitted that peace talks were currently on hold, blaming each other for this.