The UK has accused President Putin of plotting to install a pro-Moscow figure to lead Ukraine's government. 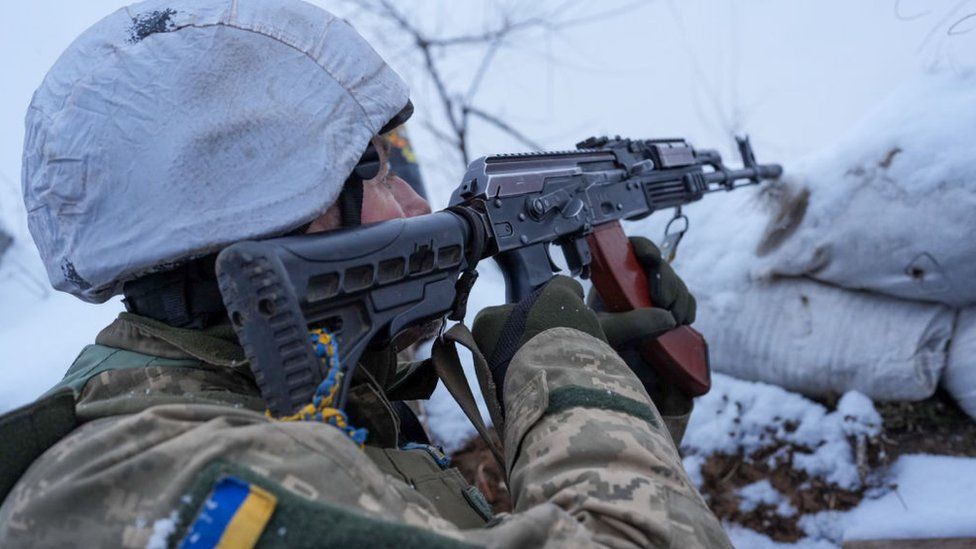 Russia has moved 100,000 troops near to its border with Ukraine but denies it is planning an invasion.

UK ministers have warned that the Russian government will face serious consequences if there is an incursion.

In a statement, Foreign Secretary Liz Truss said: "The information being released today shines a light on the extent of Russian activity designed to subvert Ukraine, and is an insight into Kremlin thinking.

"Russia must de-escalate, end its campaigns of aggression and disinformation, and pursue a path of diplomacy.

"As the UK and our partners have said repeatedly, any Russian military incursion into Ukraine would be a massive strategic mistake with severe costs."

Russia has seized Ukrainian territory before, when it annexed Crimea in 2014, after the country overthrew their pro-Russian president.

Western and Ukrainian intelligence services have suggested another invasion or incursion could happen some time in early 2022, after Russian forces amassed on the border.

Russia has denied it is planning any attack but President Putin has issued demands to the West, including that Ukraine be prevented from joining the Nato military alliance.

He also wants Nato to abandon military exercises and stop sending weapons to eastern Europe, seeing this as a direct threat to Russia's security.

The Russian Ministry of Foreign Affairs tweeted that the Foreign Office was "circulating disinformation" and urged it to "cease these provocative activities" and "stop spreading nonsense".

Mr Murayev, a media owner, lost his seat in the Ukrainian parliament when his party failed to secure 5% of the vote in the 2019 elections.

He told the Observer newspaper that the Foreign Office "seems confused".

"It isn't very logical. I'm banned from Russia. Not only that but money from my father's firm there has been confiscated," Mr Murayev said.

The Foreign Office also named four other Ukrainian politicians who it said maintained links with the Russian intelligence services.

It said some of the individuals had been in contact with Russian intelligence officers working on an invasion plan.

They include Mykola Azarov, who served as prime minister under the pro-Russian President Viktor Yanukovych, who was overthrown in 2014.

Mr Azarov then fled to Russia where he established what was widely seen as a puppet government-in-exile.

He has been the subject of international sanctions and an Interpol "red notice" issued at the request of the Ukrainian government, for charges including embezzlement and misappropriation.

Also named is Volodymyr Sivkovych, the former deputy head of the Ukrainian National Security and Defence Council, who was this week made the subject of US sanctions for allegedly working with Russian intelligence.

The others are Serhiy Arbuzov and Andriy Kluyev, who both served as deputy prime minister under Mr Yanukovych.

Hours after Russia's foreign minister and his US counterpart held what they called "frank" talks to try to reduce the chance of a wider conflict in Ukraine, a US shipment of "lethal aid" arrived in the Ukrainian capital of Kyiv on Saturday.

The delivery, including ammunition for "front line defenders", marked the first part of a $200m (£147.5m) security support package approved by US President Joe Biden in December.

Earlier, the chairman of the Commons Defence Select Committee warned an invasion could be imminent and said the UK must do more to support Ukraine.

Labour leader Sir Keir Starmer also called on the government to "protect our values and security" by being "steadfast in our opposition to Russian aggression".

Dozens of British troops have been in Ukraine since 2015 to help train their armed forces, and the UK has also made a commitment to help rebuild Ukraine's navy following Russia's invasion of Crimea in 2014.

Earlier this week, the UK announced it was sending defence weapons and extra troops for training.

Nato's 30 members - including the UK, US and several former Soviet Union states which share a border with Russia - agree that an armed attack against one is an attack against them all, and they will come to the aid of one another.

What does Putin want?

Russia's president has long claimed that the US broke a guarantee it made in 1990 that Nato would not expand further east. "They simply deceived us!" he said at a news conference last month.

Interpretations differ over what exactly was promised to the then-Soviet leader, Mikhail Gorbachev. But it is clear that Mr Putin believes the guarantee was made.

Since then, several central and eastern European countries, which used to be part of the Soviet Union or its sphere of influence, have joined Nato. Four of them - Poland, Lithuania, Latvia and Estonia - have borders with Russia.

Russia argues that this expansion, and the presence of Nato troops and military equipment near its borders, is a direct threat to its security.

The country seized and annexed the Crimean peninsula in southern Ukraine in 2014 after Ukrainians overthrew their pro-Russian president. Ever since, Ukraine's military has been locked in a war with Russian-backed rebels in areas of the east near Russia's borders.

There are fears that the conflict, which has claimed 14,000 lives and caused at least two million people to flee their homes, may reignite and that Russia's military will cross the border.