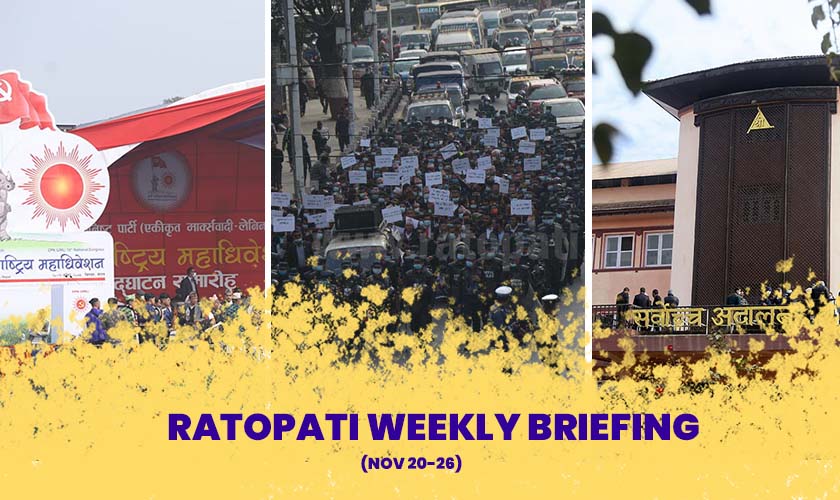 The Tenth National General Convention of the main opposition CPN-UML formally kicked off on Friday.

The inaugural session of the national jamboree was held on the bank of the Narayani River in Chitwan amidst the presence of thousands of party cadres, delegates for the convention, the general public, leaders from other political parties and international guests.

Prime Minister and Nepali Congress (NC) President Sher Bahadur Deuba addressed the session and extended his best wishes. Chairman of CPN (Maoist Center), Pushpa Kamal Dahal ‘Prachanda’, however, was not present during the event. Lila Mani Pokharel joined the program on behalf of the Maoist party.

The party will hold its close session from Saturday. As many as 2,175 delegates from across the country will elect party leadership for the next five years.

The Supreme Court (SC), this week, reported a new development as a full court, a meeting attended by all SC justices,  held on Thursday decided to implement the lottery system to schedule cause-lists to be effective from December 1.

The meeting took the decision as per the amended version of the SC Regulations which was published in the Nepal Gazette on Monday.

The new provision replaces the prerogative that the Chief Justice enjoys while assigning cases to the justices at the apex court.

A report submitted by Justice Hari Krishna Karki had recommended introducing the lottery system. Another report by Justice Mira Khadka had also suggested the procedure to implement the system.

A full court held on November 18 decided to amend the regulations in a bid to introduce the lottery system.

With this, the court is expected to resume normalcy as SC justices have been boycotting all the benches except for those hearing habeas corpus writ petitions.

However, it is still uncertain as lawyers have been staging protests for the past month.

The Nepal Bar Association (NBA), the umbrella organization of the legal practitioners, continued its protests against Chief Justice Cholendra Shumsher JB Rana this week as well.

The lawyers affiliated with the association continued staging sit-in protests on the SC premises demanding the CJ Rana step down and give a way-out, throughout the whole week.

The association also held a protest march from the Ram Shah Path-based apex court to Bluewater, where lies the prime minister’s official residence, in a bid to exert pressure on the government to impeach Rana.

Meanwhile, a team of representatives of the agitating NBA and SC justices held a meeting to chalk out possible solutions regarding SC deadlock.

On his part, PM Deuba committed to findinging a solution to the intensified disputes at the apex court in a few days after holding discussions with leaders of the ruling alliance, according to general secretary Poudel.

The Nepali Congress (NC), as part of its 14th General Convention, held conventions in 149 constituencies of the House of Representatives (HoR) on Monday.

The constituency-level conventions elected the delegates for the party's general convention to be held between December 10 and 12 for the selection of the central leadership. As per the NC’s party statute, at least 25 delegates would be elected from each election constituency.

The district convention in the districts having more than one HoR constituency was held on November 26. Similarly, province-level conventions are scheduled for December 2 and 3.

Similarly, Gagan Thapa, Bishwa Prakash Sharma and Pradeep Poudel have formally announced that they would vie for the party's general secretariat position. Of them, Thapa had lost to General Secretary Shashank Koirala in the last convention.

Chief Minister of Karnali province, Jeevan Bahadur Shahi, is all set to seek a vote of confidence in the Karnali  Province Assembly on November 30.

At the recommendation of the Council of Ministers, Province Chief Tilak Pariyar summoned a fresh session of the assembly for this purpose, according to the provincial assembly secretariat.

Shahi, parliamentary party leader of the Nepali Congress (NC) has succeeded CPN (Maoist Center)’s Mahendra Bahadur Shahi after the latter stepped down as the executive head of the province.

Minister for Industry, Tourism and Forest --- Shatrughan Mahato, and Minister for Law, Justice and Province Assembly Affairs-- Pramod Kumar Yadav assumed their office from Sunday itself after taking the oath of office and secrecy. Province Chief Hari Shanker Mishra administered the oath to the new faces in the Raut-led Cabinet

It may be noted that the Chief Minister relieved Minister Ram Naresh Raya from his own party Janata Samajbadi (JSP) to induct the CPN (US) in the government.

The National Population Census, 2021, which kicked off on November 11, concluded on Thursday.

The Central Bureau of Statistics (CBS), organizing a press conference in the capital on Friday, shared that the national census concluded without any sort of obstruction.

General director of CBS, Nebin Lal Shrestha said that it could take three months for the bureau to unveil the preliminary report of the census while it takes two years for a complete report.

With a theme of 'My census, my participation’, every individual was asked 80 questions as a part of the National Population Census.

The government deployed as many as 39,000 numerators and 8,500 numerator workplaces across the country.

Nepal began administering the US-made Pfizer COVID-19 vaccine to children aged between 12 and 17 from Kathmandu and Lalitpur districts on Sunday.

The same vaccine was administered to people older than 12 years with chronic diseases.