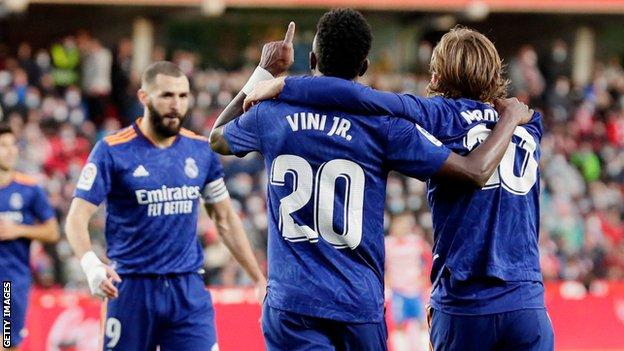 MADRID, Nov. 22: Real Madrid moved to the top of LaLiga on Sunday after they won away to Granada, while Real Sociedad were held to a 0-0 draw at home to Valencia.

Real Madrid cruised to an easy 4-1 win in Granada in a game where the result was rarely in doubt.

Real Madrid had won their last 12 meetings with Sunday's rivals and were quickly on the way to win the 13th after Marco Asensio put them ahead in the 19th minute and Nacho Fernandez doubled their lead six minutes later.

Luis Suarez pulled a goal back for the home side before the break, before Vinicius Jr scored a tap-in 10 minutes into the second half. Granada were then reduced to 10 men after Monchu was shown a direct red card for a bad challenge on the winger and Granada coach Robert Moreno was also sent off for his protests before Ferland Mendy's excellent goal ended the rout.

In the last game of the day, Real Sociedad were unable to get past an organized Valencia side who were willing to adopt underhand tactics, such as time-wasting and a continued series of niggling fouls to take something from the game.

Real Sociedad ended up with 10 players after Aritz Elustondo was sent off for reacting after being twice targeted by Valencia duo Maxi Gomez and Daniel Wass.

Betis took the fast track to an easy 3-0 win away to Elche, who have now gone six games without a win and are increasingly looking like firm relegation candidates.

Juanmi put Betis ahead in the 12th minute, before Willian Jose's penalty made it 2-0 on 24 minutes and Nabil Fekir added a third just three minutes later.

Hector Bellerin was sent off for the first time in his career in the second half, but by then the game was won and Elche sacked coach Fran Escriba less than an hour after the final whistle.

Getafe seem to be recovering under Quique Sanchez Flores and claimed their second win of the season with a 4-0 thrashing of Cadiz. Mathias Oliveira opened the scoring in the seventh minute before the floodgates opened in the last half-hour with Jorge Cuanca, Enes Unal and Jaime Mata all getting their names on the scoresheet.

On Saturday, Memphis Depay's controversial penalty at the start of the second half was enough to give Xavi Hernandez a 1-0 win over Espanyol in his debut as FC Barcelona coach.

Memphis scored from the spot after Leandro Cabrera was penalized for bringing him down although TV images showed the defender appeared to have got the ball.

Xavi started with three teenagers in his side and in the first half, Barca produced a more aggressive style of play than under Ronald Koeman.

However, the second half showed he has a lot of work to do and Espanyol should have taken at least a point with Raul de Tomas twice hitting the post, while Landry Dimata missed a header that looked easier to score after an excellent cross from Wu Lei.

Sevilla dropped two points at home to a recovering Alaves and Sevilla can be grateful for Ivan Rakitic's 91st-minute equalizer after Victor Laguardia's early goal and a 51st-minute penalty from Joselu had looked as if they were going to give Alaves an important win.

Lucas Ocampos scored Sevilla's opener in the 37th minute and Munir almost sneaked a late winner only to be denied by Alaves keeper Fernando Pacheco.

Felipe's 87th-minute header saw Atletico Madrid grind out a 1-0 win at home to Osasuna, who hardly suffered in the game before the central defender's decisive header.

Saturday kicked off with Celta Vigo drawing 1-1 at home to Villarreal, who have now drawn seven games this season.

Alberto Moreno put Villarreal ahead in the 27th minute, tapping in after a terrible mistake from Celta keeper Mathias Dituro, and Brais Mendez leveled for Celta with 15 minutes left to play after Villarreal keeper Geronimo Rulli failed to hold a shot from outside of the area.

Levante remain winless all season after their 0-0 draw at home to Athletic Club on Friday night in a rain-soaked Ciudad de Valencia Stadium.