India kicked off their new era in T20Is with a win over New Zealand at the Sawai Mansingh Stadium in Jaipur. 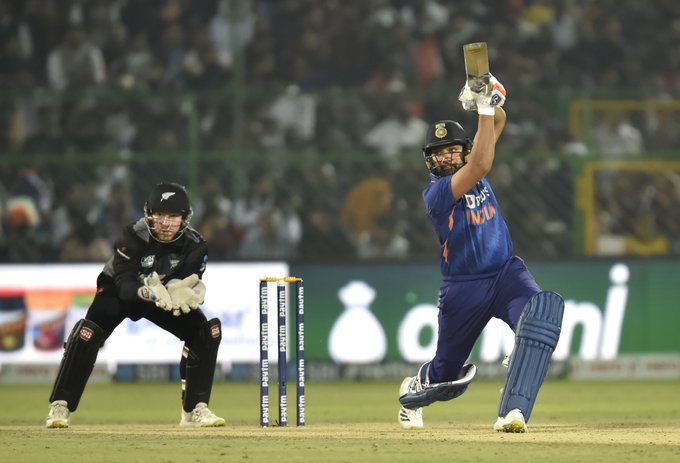 India kicked off their new era in T20Is with a win over New Zealand at the Sawai Mansingh Stadium in Jaipur.

India beat New Zealand by five wickets in the first T20 International to go 1-0 up in the three-match series on Wednesday.

Chasing 165 for the win, India were in command for three-fourth of the game but faltered in the death overs. New Zealand made a spirited comeback in the game but fell short eventually as the home side got the win with two balls and five wickets remaining.

Earlier, half centuries from Martin Guptill and Mark Chapman helped New Zealand post a par-total of 164.

Bhuvneshwar Kumar had been left out from the side after India's first match at ICC Men's T20 World Cup when they tasted defeat against Pakistan. But after being brought back into the XI in the home series against New Zealand, Bhuvneshwar fired immediately as he castled Daryl Mitchell for a golden duck.

After the early loss, New Zealand towered a 109-run stand with Martin Guptill and Mark Chapman at the crease. Chapman reached his maiden half-century in style when he punished a full-toss from Axar Patel to mid-wicket for a six.

The visitors had laid the foundation for a big finish after they managed 110 in 13.1 overs, however, Ravichandran Ashwin's arrival to bowl his final over of the spell dented the flourish. Ashwin snared the set Chapman for a fine innings of 63, followed by Glenn Phillips for a duck to finish with 2/23.

Guptill too played an important hand of 70 off just 40 deliveries, clattering 3 fours and 4 sixes. On the first ball of the 18th, Guptill tonked Deepak Chahar for a 98-metre maximum, however, immediately on the next ball Guptill was caught in the deep -- mistiming to Shreyas Iyer.

India then pulled back strongly, swinging the momentum in their favour as they conceded 20 runs in the final three, setting themselves up for a chase of 165.

In response, India got off to a flying start, courtesy of Rohit Sharma and KL Rahul. The new Indian T20I captain was in the mood, as he smashed Trent Boult and Tim Southee for two fours and a six each to bring up the 50-run partnership inside five overs.

The introduction of spin reaped immediate rewards for Tim Southee as Mitchell Santner struck off his very first ball, with Rahul holing out in the deep.

The two batters particularly targeted Todd Astle who went for 34 runs in his three overs.

Rohit Sharma eventually got out two runs short of a well-deserved half-century as he fell for Trent Boult's slower short ball trap, mistiming the pull to short fine leg.

Suryakumar Yadav continued to take the attack to the New Zealand attack, bringing up his third T20I half-century in style, hitting Lockie Ferguson for a maximum. Boult brought New Zealand's hopes alive with the wicket of Suryakumar for 62.

New Zealand turned the screws on India after the wicket, giving away just 11 runs in the next 2.2 overs to bring the equation down to 10 off the last over.

With Astle going for runs, Southee turned to Daryl Mitchell to bowl the final over.

Debutant Venkatesh Iyer eased the nerves in the dugout with a four but fell trying to reverse sweep off the very next ball. A couple of wides in the final over from Mitchell eased the pressure and Pant eventually got India across the finish line with a four.