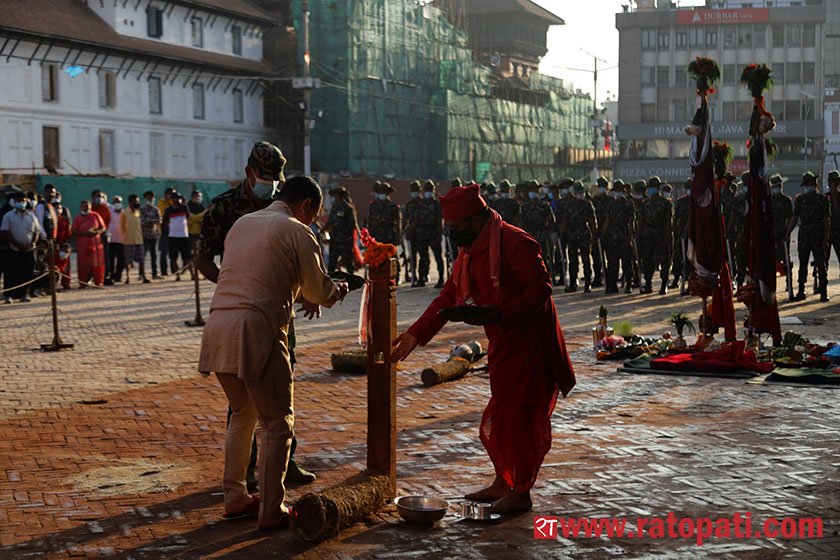 KATHMANDU: The Mahanawami festival is being observed on Thursday with fervor, worshipping Goddess Durga and making offerings.

This festival is observed on the ninth day of the waxing moon in the month of Asoj as per the lunar calendar. It is also marked as part of the 10-day Bada Dashain festival.

Special worship is performed to Durga Bhawani on the occasion of the Mahanawami and the 'jamara' which have been germinated is offered to the goddesses at various shrines.

He-goats, ducks, roosters and he-buffalos are sacrificed at various temples dedicated to the goddesses. Those who do not have the tradition of offering animal or bird sacrifices, offer the sacrifice of fruits and vegetables to the goddess.

The Durga Saptasati and Devi Stotra scriptures are also recited at home and in temples on this day.

As mentioned in the Markandeya Purana, Goddess Chamunda had slain the demon Raktabij on the day of Mahanawami. So, there is special worship of the goddess on this day with the offering of animal sacrifices.

On this day, the security forces also perform what is called the 'kot puja' or worship of the armouries.

The Taleju Temple located at Hanumandhoka in the federal capital is also opened for the devotees to pay homage on this day. It is opened only on the occasion of the Mahanawami.

The people of the Newar community also worship Bhimsen, a Hindu deity, by making animal sacrifices on the occasion of Mahanawami.