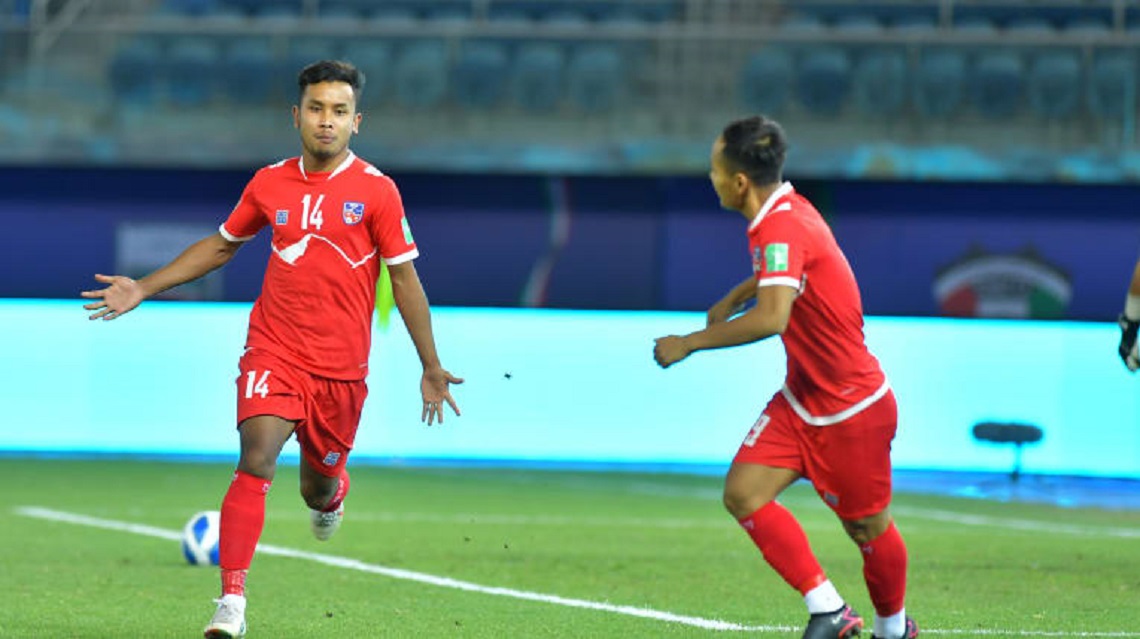 KATHMANDU, June 3:  Nepal National Football Team has defeated Chinese Taipei  2 against 0 goals in a match played under the Asian Qualifiers for World Cup at the Jaber Al-Ahmad International Stadium in Kuwait on Thursday evening.

Nepal’s Anjan Bista scored a goal in the third minute through a penalty shot. Nepal was awarded a penalty after the player from the opponent side had his hand on the ball as  Santosh Tamang shot the free kick. With this, Anjan Bista has scored a total of three goals  in the ongoing World Cup qualifiers. The two others were also scored against Chinese Taipei on Sept 10, 2019.

Nawayug Shrestha, who entered the ground as a substitute player in the second half of the match, netted the ball in the 81st minute doubling the lead. He delicately guided the cross from Sunamn Aryal into the net.

Desperate to avoid another defeat, Chinese Taipei grew into the match and began to create more of their own promising openings, albeit without regularly testing Nepal goalkeeper Kiran Chemjong, and while that momentum continued into the early minutes of the second half, genuine opportunities remained few and far between.

In hot conditions, which meant the players stopped for drinks breaks in each half, it was Chinese Taipei who briefly appeared to be showing the greater endurance, but Nepal retained an attacking threat that was evident when Manish Dangi narrowly missed with 10 minutes remaining.

The win keeps Nepal’s razor thin chances of advancing to the Third Round of qualifying for the 2022 FIFA World Cup alive, but it also puts them in a position to potentially complete their best ever World Cup qualifying campaign.

No Nepalese side has ever won three matches on the road to the World Cup, with a win in either of their remaining matches against Jordan or Australia to complete that milestone - with the first of those tests coming on Monday, the same day Chinese Taipei will meet group leaders Australia.

With this, Nepal stands at the fourth spot in the points table of the Asian Word has six points from six matches including two wins and four losses.Nepal had earlied thrashed Chinese Taipei 2-0 om 2019.

The team will then face Jordan on June 7 before wrapping up with Australia on June 11.