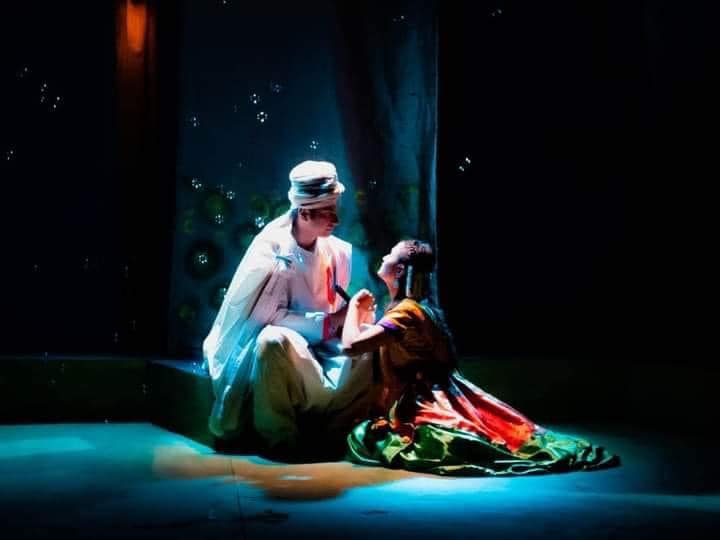 Let's assume, human society is a theater. Is there a thin veil between love-relationships in private life and society?

The plot is of the play '...Gachchhami' staged at Kunja Theater Thapagaon. There is a scene in the play, Prince Siddhartha Gautam distributes clothes as gifts to the girls of his kingdom. After distributing gifts to a group of young girls in the open, a woman's voice comes from behind a thin curtain. Yashodhara says, 'All the gifts have been distributed, is there anything for me?'

Siddhartha had nothing to give to Yashodhara. He takes his necklace off, puts it on Yashodhara and they get married. An expectation and a call of love seem to be hidden in Yashodhara's words from within the thin veil, coming in a special way. It also indicates – did Buddha's household life and love life remain under the curtain.

Gautam Buddha is a light of knowledge and love. Really! Did Buddha love his wife Yashodhara or not? Did Siddhartha suddenly leave in search of truth without having any love and goodwill towards his middle-aged wife? There are these questions too.

Where will people go, in fact? The play '...Gachchami', directed by senior theater artist Sunil Pokharel and co-directed by Birendra Hamal, inquires and researches into this major question.

In the story of the drama, two siblings (an elder brother and her sister) are researching who 'Siddhartha Gautam' or Gautam Buddha is. This is supposed to be their college project work.

They start telling the story of the Buddha From the front part of the stage. As the story progresses, one time, they enter the interior of the stage, i.e. the depth of the investigation. In the beginning, the masterminds, who are presented in a fickle way (a state with no stability in posture and no maturity in understanding), become somewhat serious towards the end of the play and sit in Vajrasana. In other words, while understanding the Buddha, their practical life has also been somewhat affected.

In yoga, Vajrasana is considered an easy asana, it is the only such asana, which can be done immediately after eating or at any time. In other words, the drama tries to say this in images and symbols - Buddha's knowledge should not be complicated, should be easy, and should be for everyone. 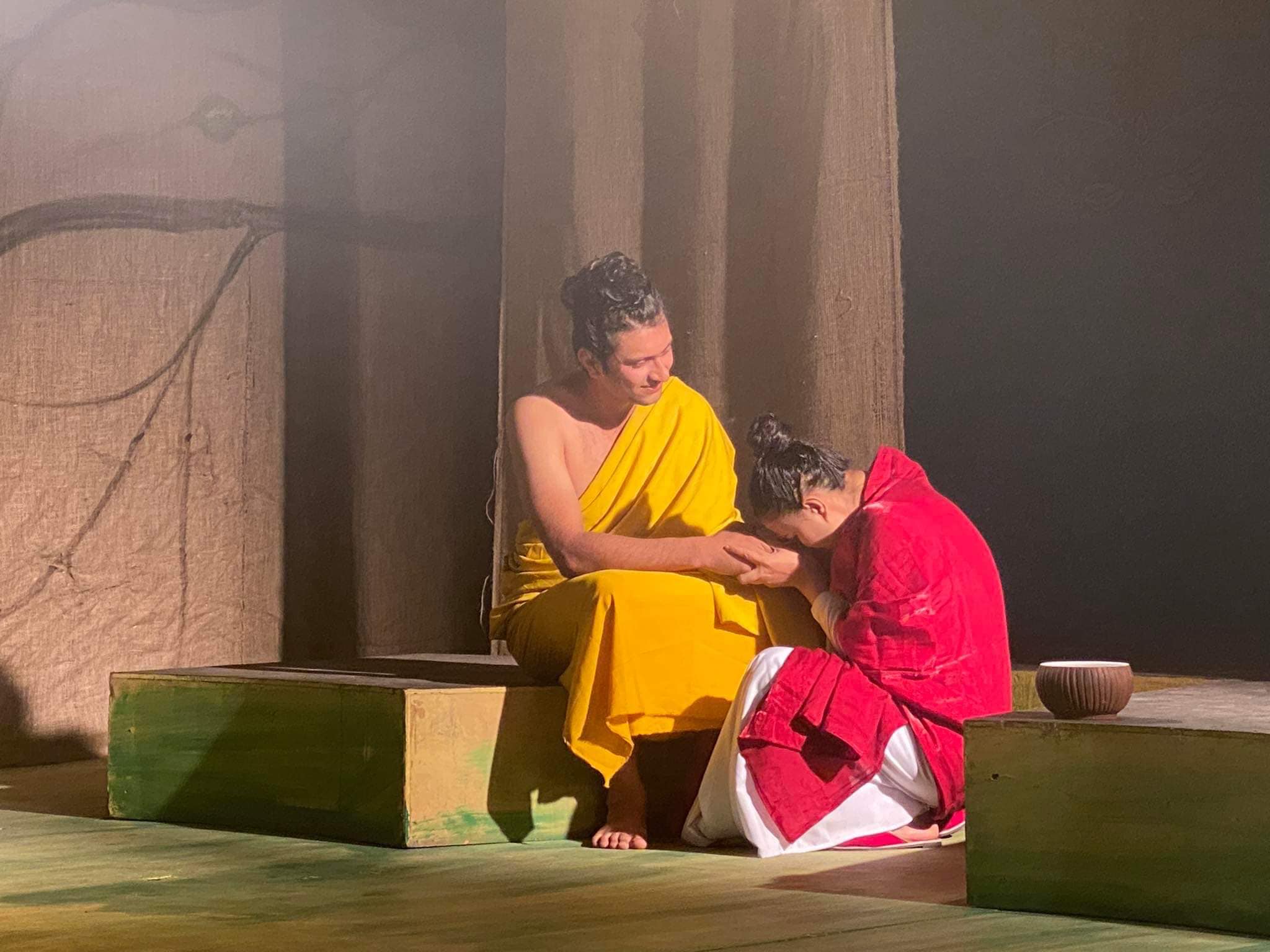 After watching the drama, I had a talk with the director Sunil Pokharel about the images and symbols that I had understood. I was cautious that there might be a difference in understanding, in a play directed by a veteran of theater artists. In a somewhat serious manner, he said, "Now (at this age?) if we must do work, I thought we should do something serious."

Sunil had called me to invite me to the play. When he said the name of the play was 'Gachchhami', Buddha's picture and character (how much I knew) had arisen in my mind. Reading Hermann Hesse's novel 'Siddhartha' 17 years ago surprised me back then. Siddhartha asks for permission to leave home in search of knowledge. But, his father orders him not to speak those words again. In the place where Siddhartha had asked for permission around dusk, his father stands there the whole night. He had observed the condition of his son. The father, defeated by his son's ego, gives permission to his son the next morning.

It is my favorite novel. My friends who came with me from the village to study in Kathmandu returned to the village as they could not sustain themselves here. When I was struggling in Kathmandu, I sometimes lost and used to imagine the Gulf countries myself. At such times I was stopped by the above context of Siddhartha's novel. Hesse's novel 'Siddhartha' is not based on Gautama Buddha's biography, but it carries a materialistic philosophy along with some spiritualism.

There is a scene in the play, where Siddhartha leaves home. Siddhartha suddenly leaves the house after letting go of his royal dress. After that, Yasodhara's monologue, or rather the lamentation, brought life to the philosophy of life. To understand this monologue written by C.K. Lal, one must understand the philosophy of Purusha and Prakriti. Yashodhara's dialogue is, 'And me? Princess Yashodhara, Feminine Power, I am Energy Prince, the fifth element and the source of heat. Finding the truth by leaving me? Even if you find it, it will not be enough Prince. You will have to come back to Kapilvastu to get perfection.

In the play, there is a scene where Siddharth leaves the house and passes through the audience. However, light is kept behind Siddhartha who is going. It would have been meaningful to put the light in front! So that the person who goes out in search of knowledge turns to the light. When the light is behind, there is shade or darkness in front of him. Sunil says, "No, I kept it like that. It is right."

Yes, Yasodhara's monologue says that the light of knowledge was in the household. After all, where does a man go, running away from a woman? 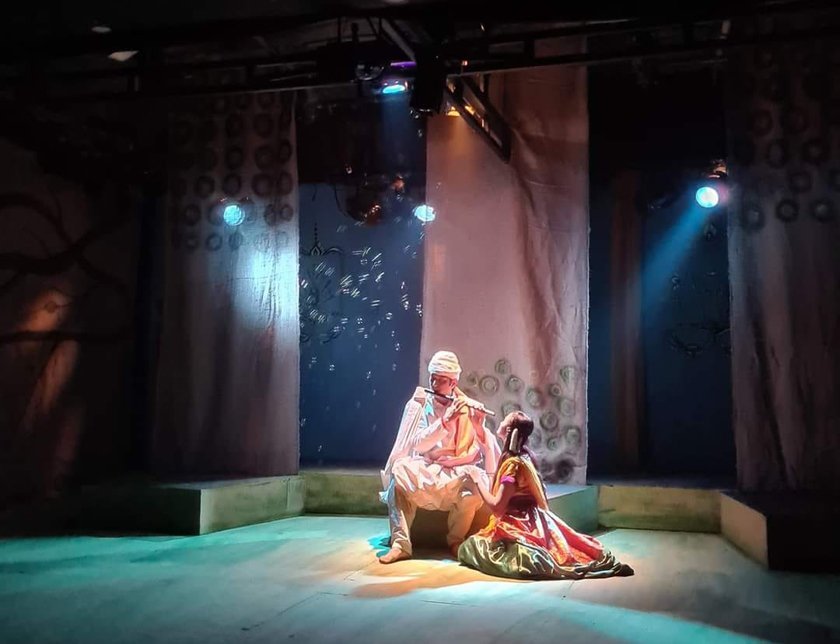 Siddhartha, who left home attains knowledge and shows the way of the four truths to the world. In the drama, Buddha's knowledge or discourse is narrated, and the background voice is more like an Oracle, which carries the weight of Buddha's knowledge. If the actor who played the role of Buddha delivered the sermon, it would probably have been funny.

When the Buddha returns home after attaining enlightenment, 12 monks come before him. In Buddhist philosophy, the glory of the twelfth (12) diagnosis is said. Which is known as 'Avidya' meaning Ignorance, 'Sanskar' (karma) meaning ritual, Vigyan (consciousness), 'Namrup' meaning name form, Shadayana (sixfold), Sparsha (touch), Vedana (pain), Trishna (craving), Upadana (elements), Bhava (being), Jati (birth) and Jaramaran (old age and death). On the other hand, a long time is also considered 12 years here. Has Sunil kept 12 monks in the same sense? Sunil says, "No, this is just a coincidence, I did not do it knowingly."

In the play, the light goes out while the Buddha is returning home. At such a time the lights went out, that the audience was restless for him to return. The play has given the audience the impression that the people of Kapilvastu are waiting for the light. Did Sunil put the scene of light going out as part of the art or drama? “It's not so, the lights have really gone out. But what a coincidence right?” says Sunil.

It is said that the conflict between the two republics (Kapilvastu and Kolia) over the water of the Rohini river leads to a situation of war. Siddhartha, who is in favor of reconciliation and peace, leaves home when war is about to happen. This is what happened in the play. Many books written about the Buddha have explored the life of the Buddha from various angles. This drama presents Buddha as a good man and not a God. Sunil says, 'After attaining Buddhahood, we directly returned Siddhartha to Kapilvastu. I did not know that Buddha used to play the flute. We did not know that Buddha loved Yasodhara like that. This is what we understand, he left. We should understand Buddha as a great teacher, a great revolutionary, and a great traveler! As a person? This is what I wanted to relay in the play.

Buddha's son Rahul and Buddha's disciple Amrapali are not shown in the play. If their stories were also included, I feel that it would be even better.

After watching the play, I spoke to Sunisha Bajgain, who played the role of Yashodhara. She said, "I am a bit of a playful person, I have to keep talking, I have to keep laughing and I get irritated easily. However, since I started rehearsing this play, I don't feel like giving immediate feedback. I feel as if I have calmed down a bit."

This play was prepared by taking the story from some books based on the life of the Buddha. It was staged in the project of Nepal Music and Theater Academy. This play will be staged till the 7th of January, 2023.