India hammer Namibia to bow out of World Cup in style 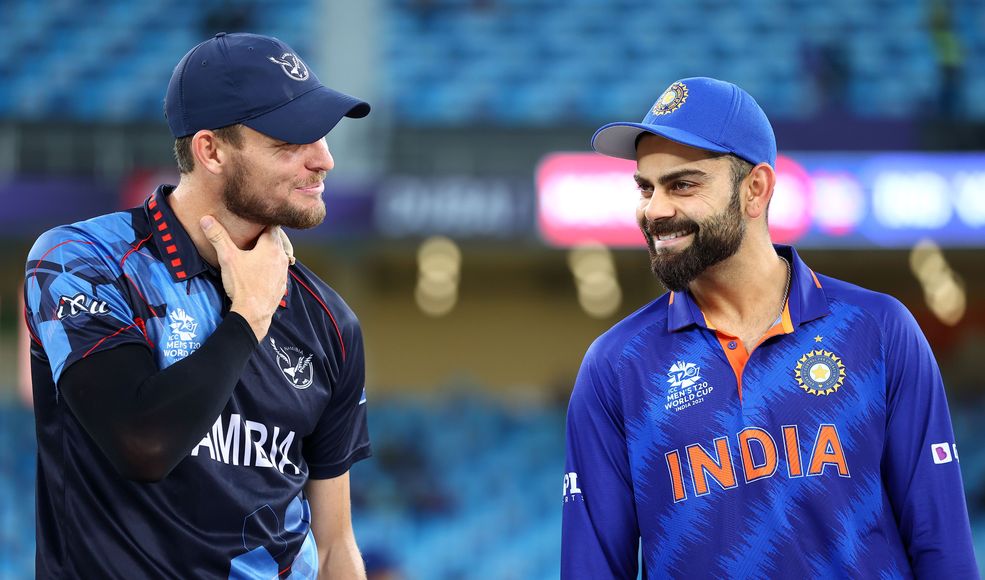 India beat Namibia by nine wickets in the final match of the Super 12 stage at the ICC Men's T20 World Cup 2021.

India ended their World Cup on a high with a crushing nine-wicket win over Namibia in the final Super 12 game of the tournament.

Ravindra Jadeja and Ravichandran Ashwin did much of the damage with the ball after Virat Kohli had won the toss in his final match as T20I captain, with the pair taking three wickets apiece to restrict Namibia to 132/8.

And half-centuries from Rohit Sharma and KL Rahul helped India reach their target with 28 balls to spare to give departing head coach Ravi Shastri a winning send-off.

Both teams knew there was no chance of reaching the semi-finals of the World Cup, with the tournament’s final four already confirmed as Pakistan, England, New Zealand and Australia.

But that didn’t prevent a high-quality game in Dubai, with India showing their quality against a Namibia side who have impressed throughout the past three weeks.

Earlier, openers Stephan Baard and Michael van Lingen had got Namibia off and running with an opening stand of 33, before van Lingen fell in the fifth over to Jasprit Bumrah.

The introduction of Jadeja helped India take back control as the spinner took a wicket in each of his first two overs to remove first Baard for a run-a-ball 21 and then Craig Williams for a duck.

And Ashwin kept the momentum going when he lured Jan Nicol Loftie-Eaton into a risky cut that he edged straight to slip, with Namibia restricted to 51/4 at the midway point of the innings.

Namibia struggle to get going

Captain Gerhard Erasmus and dangerman David Wiese looked to rebuild the innings through the middle overs, with Erasmus falling for a restrained 12 off 20 to Ashwin.

And the Jadeja-Ashwin double act continued to tie Namibia down, with both picking up further wickets to keep the power-hitting middle order from doing any damage, Jadeja accounting for JJ Smit and Ashwin brilliantly bowling Zane Green.

The pair finished with combined figures of 6/36 off their eight overs.

Bumrah returned at the death to account for Wiese just as he prepared to unleash, the allrounder falling for 26 off 25. But some big hits from Ruben Trumpelmann in the final over helped Namibia to a respectable 132/8 at the interval.

The Rahul and Rohit opening partnership crunched into the Namibia attack through the Powerplay, with Sharma dominating the strike and the scoring, racing to his half-century in just 31 balls.

But Sharma's stunning knock did come to an end in the penultimate ball of the tenth over when he top-edged a catch off Jan Frylinck that was taken by the keeper.

Yet Suryakumar Yadav, promoted to number three, simply kept the scoreboard ticking over with a classy 25* off 19.

And Rahul followed in his opening partner’s footsteps by bringing up a 50 of his own, his third of the tournament, reaching the landmark in just 35 balls before hitting the winning runs to finish unbeaten on 54.

India's hammerings of Afghanistan, Scotland and now Namibia weren't enough to make amends for the early losses to Pakistan and New Zealand, as Virat Kohli's tenure as skipper ended at the Super 12 stage

But the all-around quality of Monday’s display suggested that India’s T20 squad, who will be led by Rahul Dravid in place of the departing coach Shastri, will be among the favourites for the next World Cup in Australia in a year’s time.

Joining India in Australia in 2022 will be Namibia, who showed good qualities again in Dubai, but ultimately falling short against one of the stronger outfits at the tournament.

However the African nation’s World Cup was already a success following their progression from Round 1, which gave them the opportunity to face the best in the Super 12 as well as guaranteeing their qualification for the next ICC Men’s T20 World Cup. And, on the evidence of their showing in the UAE and Oman, the future is bright for Namibia’s T20I side.