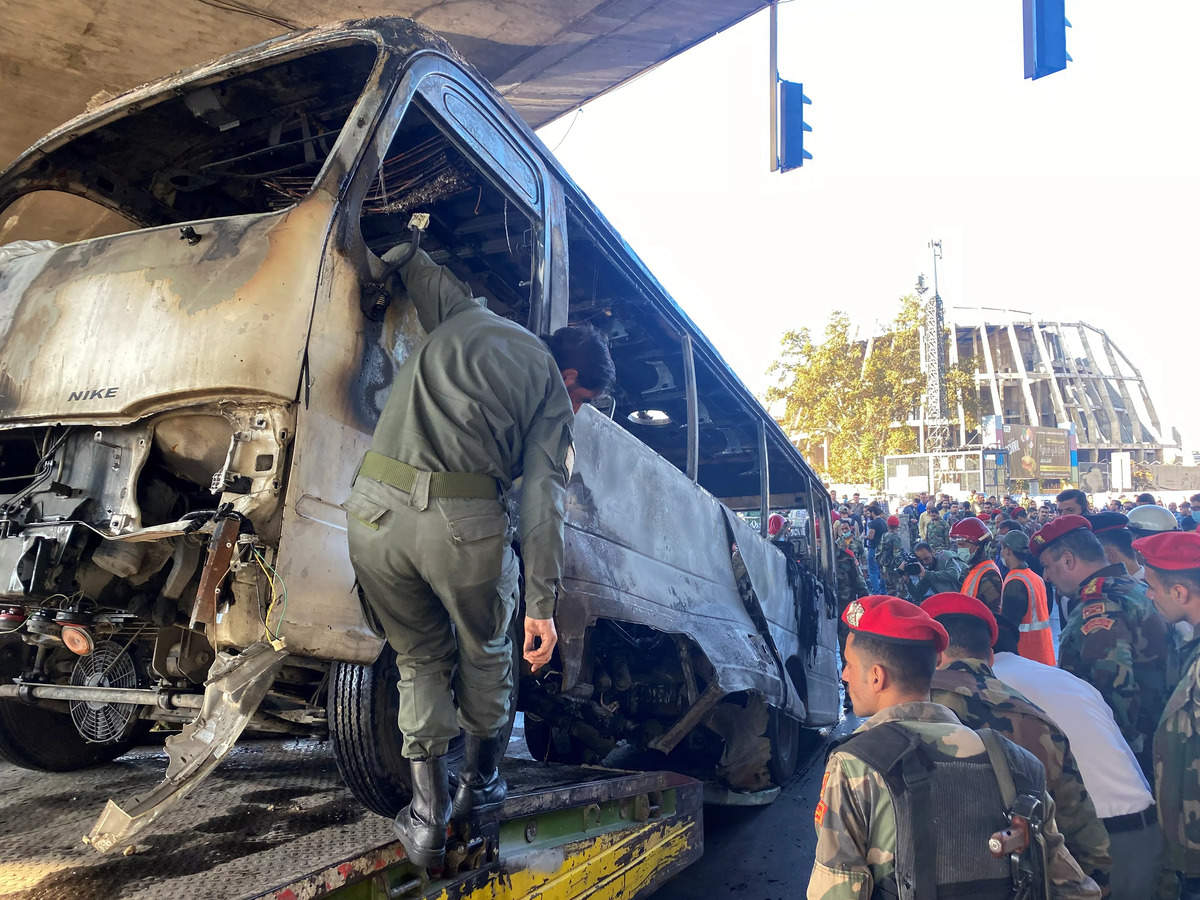 DAMASCUS, October 20 : A bomb attack on an army bus in Damascus killed at least 13 people Wednesday in the bloodiest such attack in years, the SANA state news agency reported. "A terrorist bombing using two explosive devices targeted a passing bus" at a key bridge in the capital, the news agency said, reporting an initial casualty toll of 13 dead and three wounded.

Images released by SANA showed first responders searching the charred carcass of the bus and what the news agency said was a bomb squad defusing a third device planted in the same area. Damascus had been mostly spared such violence in recent years, especially since troops and allied militia retook the last significant rebel bastion near the capital in 2018.

The attack is the deadliest in the capital since a bombing claimed by the Islamic State jihadist group targeted the Justice Palace in March 2017, killing at least 30 people. There was no immediate claim of responsibility for the bombing but most such attacks in the past were claimed by IS. The latest bombing will challenge the government's assertion that the decade-old war is over and stability guaranteed for reconstruction efforts and investment projects to begin in earnest.

The government of President Bashar al-Assad has been striving to claw itself out of international isolation and had been making inroads in recent months. - Conflict on standby - The conflict that erupted with the brutal repression of unarmed protests demanding regime change in 2011 has left around half a million people dead, according to the Syrian Observatory for Human Rights.

It also led to the largest conflict-induced displacement since World War II, with half of Syria's pre-war population of 22 million forced to flee their homes at one point. Assad's position once held by a thread, with his forces and their allies controlling barely a fifth of Syrian territory, but Russia's military intervention in 2015 marked the start of a long and bloody fightback.

Also backed by Iran and its proxy militias, government forces have recaptured nearly all key cities in the country, with US-backed Kurdish forces still running the northeast. The Islamic State's once-sprawling caliphate, that straddled swathes of Iraq and Syria, inexorably shrank to its death, which came in eastern Syria in early 2019. Since then, the Syrian government's main focus has been the northwestern region of Idlib, where many of the rebels forced to surrender in other parts of the country had gathered.

The area is dominated by the jihadist group Hayat Tahrir al-Sham (HTS), which includes leaders of Al-Qaeda's former Syria franchise and over which Turkey has some sway. HTS is not known to have carried out such attacks in Damascus however. The remnants of IS in eastern Syria have gone underground but continue to harass government and allied forces, mostly in desert areas, in hit-and-run attacks.

A truce deal brokered by Turkey and Russia, the two main foreign players in the Syria conflict, has effectively put fighting in Idlib on standby. Assad insists that he remains committed to reconquering all the territory lost to rebels at the beginning of the war, including the Idlib region.