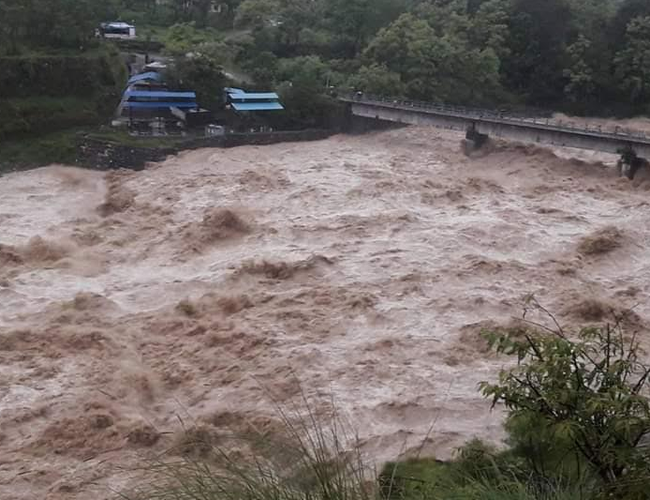 KIRATPUR, July 30: People from the catchment areas of Kamala river in Dhanusha district have drawn attention of Minister for Energy, Water Resources and Irrigation Pampha Bhusal for the lasting solution from the inundation taking place almost every year in the monsoon.

The locals and people's representatives put forth their concerns to Minister Bhusal on Thursday as she reached at Dholbajja area of Sabaila Municipality in the district of Dhanusha for an inspection visit.

On the occasion, Minister Bhusal said that a master plan, which is feasible technically and financially, would be prepared by considering the people of Sindhuli, Dhanusha and Siraha district for the lasting solution of inundation caused due to flooded river.
In this monsoon season, the swollen river damaged the some of the embankments and farmlands too.

After the inspection of the affected sites, Secretary of Water Resources and Irrigation Mani Ram Gelal said that the ministry has informed the concerned bodies of Indian government through the Ministry of Foreign Affairs regarding the damage in embankment that was developed with the assistance of Indian government.

On the occasion, lawmaker Matrika Prasad Yadav said that the river has caused havoc in the monsoon season adding that the damage would be cross border if it was not managed in time.