Houston Astros first baseman Yuli Gurriel has been banned for five games from the start of the 2018 season for making a racist gesture.

Cuban Gurriel made a slant-eyed gesture, apparently at Japanese pitcher Yu Darvish, in game three of the World Series against the Los Angeles Dodgers.

Gurriel will not miss any of the best-of-seven series, which is tied at 2-2.

Major League Baseball commissioner Rob Manfred said there was "there is no place in our game" for such behaviour.

Gurriel was filmed making the gesture in the dugout after hitting a home run off Darvish during the Astros' victory on Friday. The Dodgers won the fourth match of the series 6-2 on Saturday.

The 33-year-old played for a year in Japan and later apologised for an "offensive gesture that was indefensible".

"I sincerely apologise to everyone that I offended with my actions. I deeply regret it," said Gurriel.

"I would particularly like to apologise to Yu Darvish, a pitcher I admire and respect." 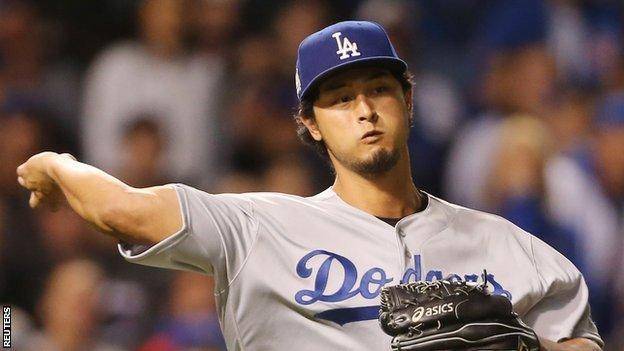 Gurriel will be required to have sensitivity training as part of his punishment and will not be paid for the five games he will miss, with his salary for those matches going to charitable causes supporting diversity efforts.

"What he [did] isn't right, but I believe we should put our effort into learning rather than to accuse him. If we can take something for this, this is a giant step for mankind.

"Since we are living in such a wonderful world, let's stay positive and move forward instead of focusing on anger. I'm counting on everyone's big love."