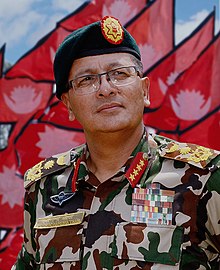 The third round of ex-armies' conference fixed for the tenure of Army Chief Purna Chandra Thapa has been concluded.

The event was targeted at ex-servicemen of Kathmandu, Bhaktapur and Lalitpur was held in the NA Valley Division.

Inaugurating the event, Army Chief Thapa assured that contribution, bravery and dedication of the Nepali Army ex-soldiers would be valued. The NA conducts at least one province-level conference of ex-armies during the tenure of each Army Chief.

As he said on the occasion, efforts are being made to further increase access of beneficiaries of the NA-run welfare-based programmes so as to increase socio-economic status of ex-armies, single women and other target groups. Likewise, the Covid-19 vaccination for ex-armies had begun.

The theme of the event is ' education, health, facilities and self-employment; base of self-dignity and prosperity'.   As the Army Chief said, the N was doing its best to create self-employment opportunities for ex-armies and provide a ground for staying within the family happily by liberating them from the compulsion of going for aboard jobs for livelihood.

Similarly, seven parents encouraging their four children or more than it for the army service were also honoured.

Likewise, wheel chair, crutch and financial aid were provided to four differently-abled persons as well as cheque of entrepreneurship loan was handed over to those women willing to run business under micro-finance programme.

On the occasion, Chief of General Staff, Lieutenant General, Prabhuram Sharma, said that the ex-army conference is being organised with an objective of sharing their experience.