Nepal is a country known throughout the world for its spectacular geography. It is home to eight of the world’s ten tallest mountains and perhaps most famously, to Mount Everest, the highest point on Earth.

But below the awe-inspiring Himalayan peaks lies a country which is at a significant point in its constitutional and political life. This beautiful country is at pivotal moment where recent and prospective changes, if not amended, may have serious consequences for freedom of religion or belief in the country.This was the overarching conclusion drawn by an international delegation of parliamentarians that visited Nepal, 9-12 October 2017.

Travelling under the auspices of the International Panel of Parliamentarians for Freedom of Religion and Belief (IPPFoRB), and at the invitation of the recently created IPPFoRB Nepal Chapter, parliamentarians from Latin America, Africa, North America, Europe and Asia met with civil society organisations, Nepalese parliamentarians and government ministers. These meetings provided unique insights into the health of religious freedom in Nepal and left little doubt that this most basic of human rights is under immense stress teetering on the edge of precipice.

International parliamentarians were shocked to find that while Nepal’s constitution establishes the country as a secular state, there are certain constitutional provisionthat infringe upon freedom of religion or belief in the country.Of particular concern is Article 26(3), which jeopardises the fundamental right of every individual to follow a religion of his or her own choice and to manifest that religion in word and action. It states:

No person shall, in the exercise of the right conferred by this Article, do, or cause to be done, any act which may be contrary to public health, decency and morality or breach public peace, or convert another person from one religion to another or any act or conduct that may jeopardize other’s religion and such act shall be punishable by law.

Yet more worrying still, on 8 August 2017 the Nepalese Parliament passed secondary legislation to give effect to this Clause. This Criminal Code Bill is currently awaiting the President’s signature, and if it becomes law, it contains provisions which infringe yet further upon the right to freedom of religion or belief in the country.

The wording of Clause 158 of Section 9 of the Bill, which criminalises the ‘hurting of religious sentiment’, is worryingly similar to the blasphemy laws in Pakistan, which make it a criminal offence to speak negatively about another’s religion. These laws are poorly defined and widely misused to settle personal scores, to target religious minorities or to further extremist agendas. Decades of misuse of the blasphemy laws have resulted in a situation where even voicing disagreement with these laws in Pakistan can lead to violence.

There is a very real risk that the provisions of Clause 160 in Section 9 of the Bill, which restrict religious conversion, could be invoked against a wide range of legitimate expressions of religion or belief, including the charitable activities of religious groups, or merely speaking about one’s faith. We know that similar anti-conversion laws in force in neighbouring Burma and in six Indian states have been misused to foster social intolerance and violence towards peaceful religious activities, and to falsely accuse religious minorities - especially Muslims and Christians - of forcefully converting others.

True, Nepal is not Pakistan, but we have already seen threats to freedom of religion or belief in Nepal that gives cause for concern that the country risks following Pakistan downa slippery slope of increased restrictions and heightened societal hostility against religions minorities. Last June, eight Nepali Christians were charged with attempting to convert children after simply sharing a comic book on the story of Jesus. Fortunately they were acquitted of all charges in December 2016, but similar cases could occur in the future, particularly if this Bill becomes law and the Constitution remains unchanged.

These developments demonstrate a worrying inconsistency with the requirements of Article 18 of the International Covenant on Civil and Political Rights (ICCPR), which lays out clear protections for religious freedom as a fundamental right of every individual, and which Nepal is bound to implement according to its own 1991 Treaty Act.

In the rush to pass its new constitution the government appears to have forgotten it is a signatory to international treaties that protect an individual’s right to have a religion, tochange that religion and even tohave no religion at all. Nepal needs to be careful that it doesn’tdevelop a reputation as the type of country that on the one hand signs international treaties, but then does the polar opposite when drafting and implementing its own laws.

This situation must change. Civil society organisations and parliamentarians in Nepal need to redouble their efforts to hold the government to account for its international obligations.This though is a struggle that is far too important just to be left to domestic actors.

The International Panel of Parliamentarians for Freedom of Religion or Belief, which has a presence in over 70 countries, is committed to pressing governments around the world to add their weight to these efforts by pressing the President of Nepal to withhold her signature from the Criminal Code and, when the time is right, amend Article 6 (3) of Nepal’s Constitution.

These actions are not optional, but are vital, if we are to ensure that the right to freedom of religion or belief is upheld in this beautiful, mountainous and awe-inspiring country. 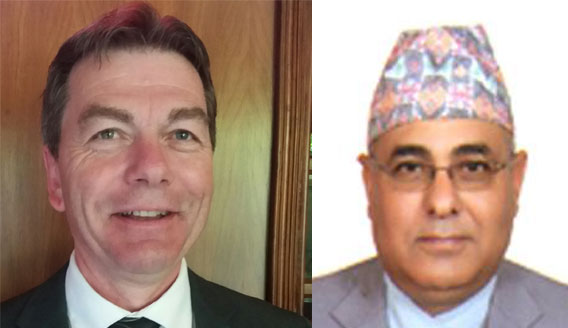 David Anderson, Member of Parliament, Canada, and Chair of the IPPFoRB Steering Group