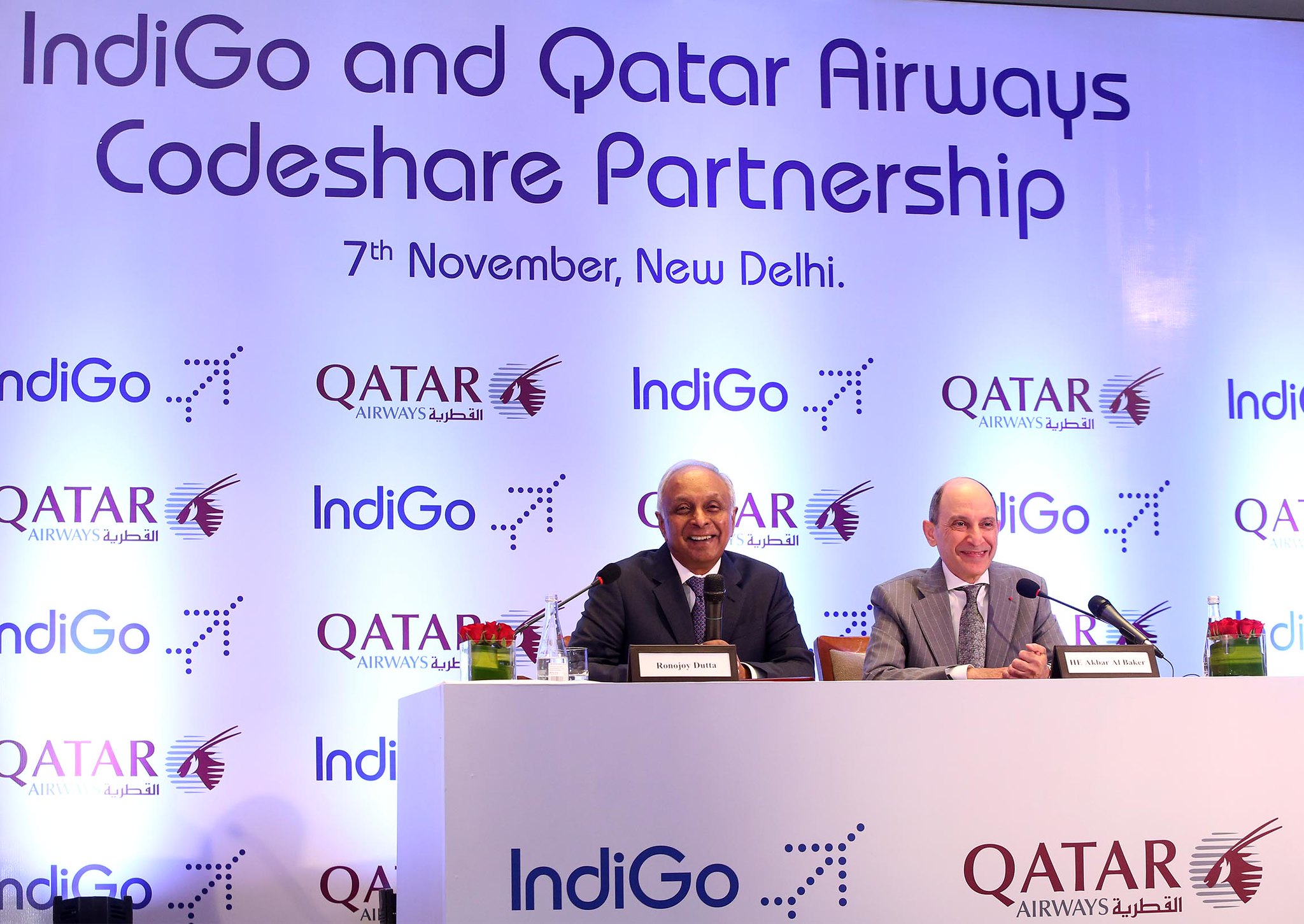 DOHA– Qatar Airways is pleased to announce it has signed a codeshare agreement with IndiGo, India’s largest passenger airline. Sales will start from today with the first codeshare flights to operate from 18 December 2019.

This agreement will enable the airline to place its code on IndiGo flights between Doha and Delhi, Mumbai and Hyderabad and is the first step in strengthening cooperation between the ‘World’s Best Airline’ and the ‘Best Low-Cost Airline in India’.

Qatar Airways Group Chief Executive, His Excellency Mr. Akbar Al Baker, said: “We are extremely proud to secure this strategic partnership with IndiGo, the largest airline in one of the world’s fastest growing aviation markets. We believe this agreement will be just the first step in strengthening our relationship and we very much look forward to working together to harness our complementary strengths and resources to enhance the travel experience for our passengers around the world.”

IndiGo Chief Executive Officer, Mr. Ronojoy Dutta, said: “This is a momentous occasion for us, as we sign this codeshare agreement with one of the finest airlines in the world. This strategic alliance will not only strengthen our international operations, but also boost economic growth in India, by bringing in more traffic and heralding opportunities for trade and tourism through seamless mobility. We are confident of a successful partnership as we extend our signature on-time, courteous and hassle-free service experience to the passengers of Qatar Airways. These are exciting times for the aviation industry and it is our commitment to remain focused in building one of the best air transportation systems in the world.”

Qatar Airways currently operates a modern fleet of more than 250 aircraft via its hub, Hamad International Airport (HIA), to more than 160 destinations worldwide. The world’s fastest-growing airline has added a number of exciting new destinations to its growing network this year, including Rabat, Morocco; Izmir, Turkey; Malta; Davao, Philippines; Lisbon, Portugal; Mogadishu, Somalia; and Langkawi, Malaysia. The airline will add Gaborone, Botswana, in 2019 to its extensive route network along with Luanda, Angola; and Osaka, Japan, in 2020.

IndiGo is India’s largest passenger airline with a domestic market share of 47% as of August 2019 and is amongst the fastest growing carriers in the world. IndiGo has a simple philosophy: offer low fares and an on-time, courteous, hassle-free service. With its fleet of over 240 aircraft, the airline offers almost 1,500 daily flights and connects 60 domestic destinations and 23 international destinations.

Notes to Editors:
About Qatar Airways:
Qatar Airways, the national carrier of the State of Qatar, is celebrating more than 20 years of Going Places Together with travellers across its more than 160 business and leisure destinations on board a modern fleet of more than 250 aircraft. The world’s fastest-growing airline has added a number of exciting new destinations to its growing network this year, including Rabat, Morocco; Izmir, Turkey; Malta; Davao, Philippines; Lisbon, Portugal; and Mogadishu, Somalia. The airline will add Langkawi, Malaysia and Gaborone, Botswana, in 2019 to its extensive route network along with Luanda, Angola; and Osaka, Japan, following in 2020.

A multiple award-winning airline, Qatar Airways was named ‘World’s Best Airline’ by the 2019 World Airline Awards, managed by international air transport rating organisation Skytrax. It was also named ‘Best Airline in the Middle East’, ‘World’s Best Business Class’ and ‘Best Business Class Seat’, in recognition of its ground-breaking Business Class experience, Qsuite. Qatar Airways is the only airline to have been awarded the coveted “Skytrax Airline of the Year” title, which is recognised as the pinnacle of excellence in the airline industry, five times.

Qsuite, a patented Qatar Airways product, features the industry’s first-ever double bed in Business Class, as well as privacy panels that stow away, allowing passengers in adjoining seats to create their own private room, a first of its kind in the industry.

Qatar Airways was the first Gulf carrier to join global airline alliance oneworld, enabling its passengers to benefit from more than 1,000 airports in more than 160 countries, with 14,250 daily departures.

Oryx One, Qatar Airways’ in-flight entertainment system offers passengers up to 4,000 entertainment options from the latest blockbuster movies, TV box sets, music, games and much more. Passengers flying on Qatar Airways flights served by its B787, B777, A350, A380, A319 and select A320 and A330 aircraft can also stay in touch with their friends and family around the world by using the award-winning airline’s on-board Wi-Fi and GSM service.

Qatar Airways proudly supports a range of exciting international and local initiatives dedicated to enriching the global community that it serves. Qatar Airways, the official FIFA partner, is the official sponsor of many top-level sporting events, including the FIFA 2022 World Cup, reflecting the values of sports as a means of bringing people together, something at the core of the airline’s own brand message - Going Places Together.